But Will It Be Brittle?

For reasons that are obvious to anyone who has ever seen me ignore directions and carry on, I've given up on baking without direct adult supervision, which means holiday cookies are out of the question.

However, I recently came across this peanut butter brittle recipe which I've heard is easy and as a bonus, doesn't require the stove, thus cutting down my chances of burning the house down to almost nothing. So I bought the ingredients today and whipped up a batch.

First off, let me just say that 50% of what I do in the kitchen is prepare food for the critters, so even though they were all fed only one hour before, all the little furry people in the house rushed to join me in the kitchen in anticipation, except the little dog because after six years she still won't go into that one section of the kitchen, so she got excited and wagged her tail just outside the kitchen. "Get out of the kitchen!" was said approximately fifty times this evening. Its effectiveness was... limited.

Also, my microwave is at least 25 years old. I mean, I think I got it from my brother in 1992 and I don't know how long he had it before that. It still works great, except for the interior light and the turntable. So that section that talks about monitoring closely until it's the right color? Well, I went with checking it every thirty seconds ("Get out of the kitchen!") and then pulling it out at the four minute mark ("Get out of the kitchen!") when one section was really dark brown and the rest was more golden. (Note to self: probably should have at least turned the bowl when I was checking it every thirty seconds.) 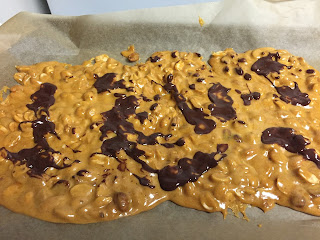 (I threw some dark chocolate pieces on the top just to see how it would be.)

I'm not sure I'll ever get the bowl clean again. If I'd been smart I would have just waited for it to cool down and then given it to the big dog, but I already threatened to cancel Christmas for him today after he got into the kitchen trash while I was taking a shower, so he doesn't deserve peanut brittle even if he would do a great job cleaning the bowl.

It's still cooling, so I don't know if it will break apart like it's supposed to or just bend because I didn't cook it long enough. The stuff left in the bowl seemed okay though.

Now I'm trying to remember if I even like peanut brittle...

It's Holidailies time! Now go read some other blogs!
Posted by Theresa B (of Nebulopathy) at 6:54 PM

It looks like it's the right color, at least!

It is the right color. And it broke up like it was supposed to. And it tasted the way I thought it should, too. It probably would have tasted even better had I not first eaten a handful of the madeleines that I bought at the store. :)