I think I caught a glimpse of my own future the other day, and it's a little bit scary.

So I was running plodding along on my usual route down Gibson to the one stoplight I need to get through in order to make it to the edge of town.

(I realize this makes my town sound even smaller than it is -- we have 50,000+ people and many, many stoplights, but I happen to live about one mile from commercial fields on the south end of town and that's where I try to spend most of my running time.)

Anyhow, as I was huffing and puffing my way down the street I noticed cars braking and swerving around a car that was stopped in front of the intersection at a green light. This part of Gibson is two lanes in each direction and this intersection has a left turn lane, so the only reason to stop in the number one lane on a green light is car trouble. And I'm an expert at car trouble! I mean, I'm an expert at commiserating about car trouble -- I can't actually fix anything. I'm so useless with cars, the last time I tried to put air in my tire I somehow ended up with lower pressure than I started with, but I'm totally blaming that on a broken air machine or something. Yeah I don't get it either.

The light went through three cycles that way, with that car sitting, waiting for the left turn signal to turn green. By the time I ran past them there was a car next to them in the left turn lane, so I didn't feel obligated to help. (Yeah, I'm not sure how exactly I was going to help either -- I mean, clearly this driver wasn't going to be able to parallel park their way into the left turn lane, and the big dog and I probably couldn't set off the sensor.)

I did sprint past the front of their car, though, because I figured at some point the driver was going to give up on the stoplight completely and gun it and it would be my luck to be right in front of them when it happened. 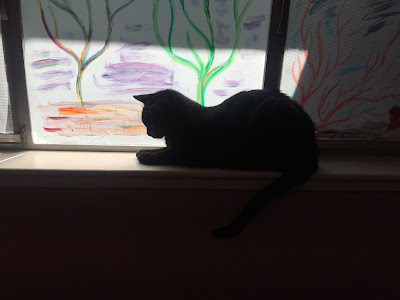 This picture is completely unrelated, but isn't Ripley cute?

So that's what I'll be like about thirty years from now, but instead of my spouse sitting next to me in the car distracting me to the point I don't notice we've been sitting at the same light for over five minutes, it will probably be a dog or cat. Let's just hope they get the kinks worked out of self-driving cars soon...

Posted by Theresa B (of Nebulopathy) at 7:43 PM