Is It Time To Go Yet? How About Now? Now?

In general my cats are pretty good alarm clocks, and they'll start bugging me within fifteen minutes of when I normally get up. They do still need to work on the concept of daylight saving time. The dogs, though, have really narrowed down their time-telling skills to one specific point in the week.

Every Tuesday at 4pm, it starts. The whining. The watching. The jumping up every time I move. Only on Tuesdays. And always starting at 4pm. Unfortunately, we don't leave for agility for another two and a half hours, so it's really annoying. Impressive, but annoying. 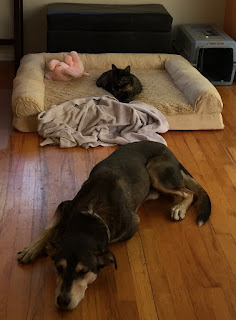 George being bullied by Crow the cat

I know they're having hot winds and wildfires in the southern half of the state, but up here it suddenly got cold two days ago. (That's cold according to Woodland standards -- it's probably still considered balmy if you live in a place where white stuff falls from the sky, but I had to put on a scarf. And I thought about finding my gloves.) My dogs love the cold in small doses. Two days ago it rained, which brings up all the distracting smells. All that stuff combined meant that there was more excitement than precision at agility tonight.

I know I always laugh about my dogs doing the exact same things incorrectly which means I'm the one at fault (true!), but they're different in a lot of ways. Ginger runs the course, her little fluffy tail wagging the entire time, and I really need to indicate where she's going well in advance or she'll just run somewhere at top speed. So if she's coming out of the weave poles, I had better have already told her the she's going out over the jump and then off to the teeter so she can plan her path or there's going to be trouble. She's usually a lot faster than George because of that and yet... we have evenings where she just flips me the metaphorical middle finger and wanders off to do her own thing. It doesn't happen very often any more, but there was a period of about two months a couple years ago where I was ready to strangle her on a weekly basis. 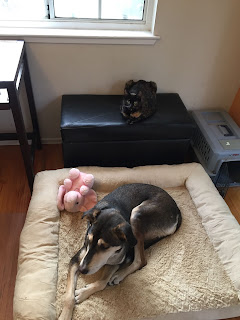 They eventually worked it out

George has a different approach. He continues to get more confident, but he always knows exactly where I am and listens when I call him back on course. He won't yet run too far in front of me, so I can't stay still and direct him -- I have to get a lot closer to all the obstacles to keep him going or else he turns around and comes back to me. We're working on it. He has started to memorize courses -- he got a little goofy tonight and skipped one obstacle, then ran the next four in the correct sequence while I watched him without directing him at all.

So yeah, we had a good time tonight and I think my fingers may thaw out at some point before we go to bed...

You're in woodland, eh? I'm in Davis.

It's amazing how dogs' internal clocks are set (god help us when time changes occur). Mine start asking for dinner around 4. The weird thing is that theycome in here and nudge me. I give a skritch and say "Not now...come back in an hour" and by god they come back in an hour, pretty much exactly 60 minutes. They have been doing this for so long now, I can't help but think they somehow know what I mean.

Our cats get wet food in the morning; they're sitting right outside the bedroom door as early as 5:30 (I get up at 6:00). They also get wet food in the afternoon; they start staring at their bowls at 3:30. We try to hold out until 5:00, but rarely make it.