The Latest Conference I Didn't Attend

About a month ago my boss called me on my day off and when I answered the phone with "Gosh, this must be really important", he told me he wasn't sure. That's always a good start to a conversation. Turns out that the gigantic dinosaur that my gigantic company had recently purchased was having some sort of conference in early December and my boss' boss' boss (there might be one more level in there but I can't be bothered to learn the company hierarchy -- I shall hereafter refer to him as my great grand-boss) wanted me, specifically, to attend.

When I say "some sort of conference" I'm not being deliberately vague to avoid giving details that would get me fired. Literally all my boss knew about this conference was that
We googled the crap out of the name and came up with one web page that just had some pictures of people in a hallway. But he thought maybe there might be some sort of hackathon involved. Or maybe not. There was also no indication of what subjects the conference might cover. Or even what audience it was suitable for.

At this point I should have just said no, but the only way to get off the phone (on my day off, mind you) was a weak "okay, I guess".

Then I spent the next two weeks complaining about it. Nobody had any information about the damn thing and on a good day it would take about three hours to get there from my house. That would mean leaving my house at 5am and not falling asleep in stop-and-go traffic, spending all day learning... something.... and then driving back home again. And then doing the same thing the next day. They did offer to pay for a hotel room, but then I would have had to set up pet care. As it was I'd almost certainly be missing agility, and that would not have gone over well with the little people in the house of the dog variety.

Anyhow, I finally told my boss that I wasn't going to some conference that didn't have an agenda, and besides, I'd probably fall asleep and crash my car and it would be all the company's fault.

Finally I did what any mature career-oriented person would do -- I made plans to go.

Just kidding. I sent mail directly to great grand-boss. This is pretty much verbatim what it said [with additional explanations]:

Dude, [I know it was a business email, but we're both from California so this is a completely appropriate salutation.]

If you want me to quit, just tell me that. Don't make everyone in the chain of command try to convince me that I want to go to some random conference without an agenda in the bowels of Santa Clara.

About five minutes later I got a reply:


LOL. You don't have to go if you don't want to. [Grand-boss] had suggested your name.

And then suddenly I was no longer on the list.

I mean, there's probably a reason I have a job instead of a career, but at least I didn't have to drive to Santa Clara at 5am yesterday and today... 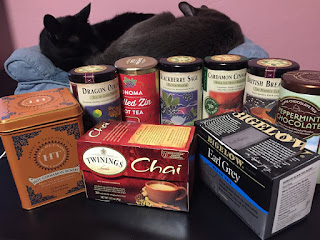 Yep, it's a totally unrelated picture of cats and tea.

Posted by Theresa B (of Nebulopathy) at 8:22 PM

Did you ever find out what it was about by someone who attended?

Your business sounds quite strange.

Yes, there are moments when I feel that it may not be quite normal...