I think I've mentioned this before, but when I first moved to Woodland there were no squirrels here.

It was the weirdest thing -- our motto is "City of Trees" and Davis, a mere 10 miles south of here, is overrun with the things. And yet for the first 10+ years I lived here, I only had one squirrel sighting. My neighbor told me there had been some great squirrel extermination project fifty years ago, but I refuse to believe you can semi-permanently wipe out something that leaves a niche unfilled. 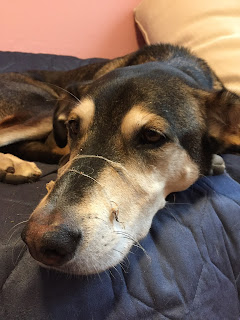 What?! I haven't been running through the ivy trying to get to squirrels in the back yard!

Anyhow, all that changed a couple of years ago, and now there are squirrels all over the place. The little dog doesn't even notice them, but the big dog is obsessed. If he's seen squirrels in a particular tree within the last few weeks, we can't go by it without giving him a chance to look long and hard. (This also applies to fake deer. He's a little special.) Today he pranced all around at the end of his leash because there was a squirrel across the street, sitting on the ground, taunting him.

We pass a few infested trees during our cool-down walk after a run, and this is how I know that the big dog could go another few miles without any trouble. (I, however, cannot. Maybe if there were trees filled with chocolate or Pad Thai, but sadly we just have squirrels.)

Speaking of metaphorical squirrels, though, I had planned to pick up a prescription refill for Crow the cat today and then I got in my car to go to work and did the mental equivalent of "Look, a squirrel!" and forgot about it until it was too late.

Tomorrow is another day...

It's Holidailies time! Now go read some other blogs!
Posted by Theresa B (of Nebulopathy) at 8:54 PM

The squirrels in the woods next to our building like to sit on our balcony railing and taunt the cats. Hah!

How about turkey? Have the Davis turkeys migrated to Woodland?

We do get flocks of turkeys every once in a while, but they move through after a few days. They don't set up a permanent camp and start a street gang like the Davis turkeys.