This year I finally replaced my car. The "thinking about replacing my car" saga had already been going on for a few years when I wrote this gem back in 2012:


Anyhow, what will likely happen is that I'll just keep driving my Civic until it suffers from some catastrophic break down, at which point I'll walk to the nearest car dealership and buy the first thing I see.

I'm not going to say I can always accurately predict the future or anything, but... it turns out that I know myself pretty well.

On a day when the temps were around 110 F, I was driving back from the Walnut Creek office, cruising along at 80 mph in the fast lane in my 2002 Civic with 250,000+ miles when suddenly I had no acceleration. Also, every single light on the dashboard was lit up. It was also making a sort of funny noise, but at that point I was more worried about the fact that my speed was dropping.

Turns out that putting your emergency flashers on will convince some people to let you merge when they otherwise might not be so inclined, and I was able to make it across five lanes of traffic onto the off-ramp before I lost momentum. As a bonus, I ended up in the shade. As an extra bonus, I was right next to a Dairy Queen.

So I had fries and a soda while I was waiting for the tow truck. While I was waiting, I did the math -- 250,000+ miles on a car that was over 15 years old with something really wrong with the engine... In my book that equaled time to get a new car. I mean, what if it broke down again and I was forced to get food in a Burger King, or worse, McDonalds? There's only so far a person can go.

But then I had to find a new car, which turned out to be the first car I drove at the dealership in walking distance.

I'm not really in love with my new-to-me 2016 Acura TLX -- it's pretty, but it's meant for someone with more expensive tastes and a love of stupid gadgetry -- but at least it gets me from point A to point B reliably so I guess I shouldn't complain too loudly.

Still... I miss the old Civic. 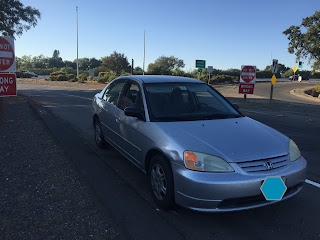 It's Holidailies time! Now go read some other blogs!
Posted by Theresa B (of Nebulopathy) at 7:03 PM

Ahhh...the angst of letting go the old! OUr Civic had about the same # of miles on it when it was time to turn it in. Fortunately, I like the new Accord better. I love my gadgets!