It's New Year's Eve and of course I'm spending it at my house. (That's not because of the pandemic. I always spend NYE alone. You think I'm going to a party with a bunch of drunk strangers? Nah.) I just remembered that I need to walk my dog before it gets dark so there will be fewer fireworks during the walk.
(Look, I'm generally a pacifist, and am against the death penalty in principle, but I'd gladly take a broken bottle to the jerks setting off illegal fireworks and scaring dogs.  So... I guess I'm a bad pacifist. It's a work in progress.)
My only goal for next year is to change my Todo List to a Tada List because I think the whole idea is kind of hilarious but also maybe a good brain hack.
In other news, my friend H just made the cake I made earlier and sent me a message asking if mine raised at all. So I had to confess that mine was pretty dense, but part of that was because my oven Just Ain't Right so I had to bake it twice as long and it still wasn't completely done. But then H mentioned that she made it without the vegetable oil or molasses which is exactly the sort of thing I would do, so it makes sense that we are friends.
Anyhow, I hope 2022 brings everyone joy and now it's time to go walk the dog. 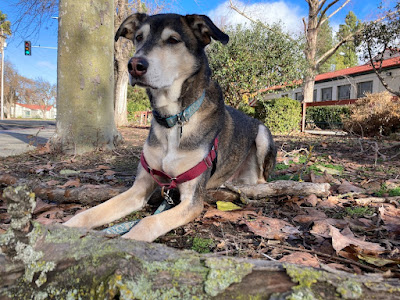 He really is ruggedly handsome, isn't he?
Posted by Theresa B (of Nebulopathy) at 5:01 PM