I have reached the point in editing the first draft of the current novel where I'm down to one major note ("bad things need to happen here") and I still need to write the last two scenes. That's down from about 25 notes, most of which read "fix this", and a handful of scenes that said "[FILL IN]".
So this afternoon I will sit down with the book on my kindle, with my laptop by my side, and read through the whole thing in one go. Then I will either be convinced this is the best book ever written, or it's the worst book that has ever had the misfortune of being typed. There's nothing in-between.
The novel will then switch back and forth between these two extremes (even without any changes in the novel itself) until it's published, at which point I will forget all about it and move on.
In case you think this is unhinged, this is a pretty common syndrome for a lot of writers. It took me a few years to accept it. Now when I get to the "this book is so terrible it should be doused in acid" stage, I recognize it for what it is, and just keep moving along. 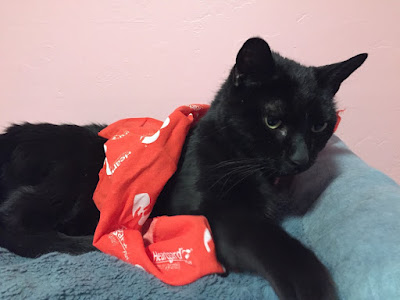 A picture of Ripley from a few years ago. He really was one of the best cats ever.
Posted by Theresa B (of Nebulopathy) at 1:24 PM