My History With Dogs

I got email from a friend last night saying his son-in-law had a young German Shepherd that needed to be rehomed.
My first reply was along the lines of "There's a NorCal GSD rescue group. Start there." But then I added a quick "What kind of lemon is this dog?"
I mean, I'm down to one dog. If I move out of the country, it will be much easier with fewer pets, and it's not like I have extra income at this point, so I've been resisting the urge to look, but I've traditionally been a sucker.
Dog #1 was old and blind, and turned out to have some pretty severe separation anxiety. I loved her dearly for five years, but she was definitely a lemon.
Dog #2 was old and deaf and had a tumor that made one leg twice the size of the other. Molly was also the stupidest dog I have ever met, but I don't necessarily consider that a bad thing in a dog. The opposite can be a real problem. Molly boarded for a week over the holidays one time, and she absolutely did not remember who I was until we were halfway home. I could see the exact moment when it clicked. She was a sweet dog, but also a bit of a lemon.
Dog #3 was on her fourth or fifth home by the time she came to me. Am I a little dog person? Absolutely not, but Ginger managed to weasel her way into good dog status in our house. She was only kind of a lemon.
Dog #4 was physically healthy but so traumatized by being in the shelter they couldn't evaluate him for safety. Georgie had all kinds of weird behaviors and fears — doors were a huge issue for months, and he still won't push them open on his own.  He definitely started out as a lemon.
And that's where we are today. It turns out this other dog was found on a solar farm out in the middle of the desert, so he may not inherently be a lemon. But he's not good with cats, so that makes him a non-starter in my house.
Anyhow, if anyone without cats is looking for a ~9-month old GSD, let me know. 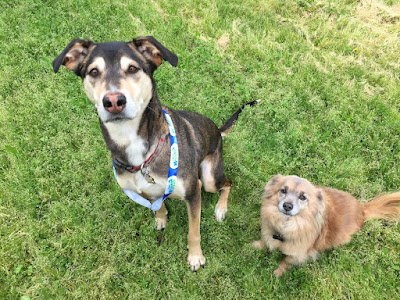