I live in the older part of my town. My house wasn't built until 1958, but the houses on either side are 40 years older. In some areas that wouldn't be too old, but this is California. This year the city has been replacing the water and sewer mains in the streets around my house, but one thing that hasn't been touched is the electricity.
The poles run down the alley behind my yard, and a big ugly cable goes diagonally over my yard to get power to my house. My former boss, H., who was originally from Chile and Venezuela, laughed at the idea of anyone having above-ground power lines. This, coming from a guy who used to stop on his drive home, climb cell towers, and manually adjust the antenna tilt when he wanted to change the coverage.
But that's the way it is. Every time we have a wind storm — something happening with increasing frequency — I check the yard before letting the dog out in case there's a live wire in the back yard. We lose power fairly frequently during storms, and last year the power was off for two days after a fairly minor wind event.
Anyhow, all this is to say I doubt I'll have power on Monday. All the county services are tweeting about changed schedules due to high winds at the beginning of the week, which they've never done before.
Fingers crossed I still have a roof at the end of the week! 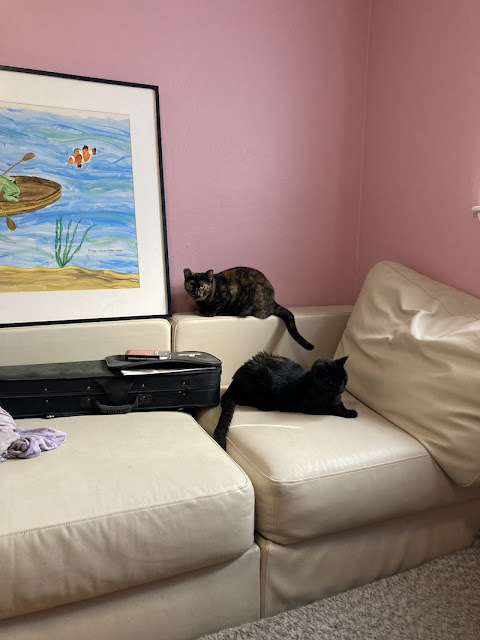 This picture is a few months old, but the tortoiseshell cat on top of the sofa just came into my office a few minutes ago. Gin lives in the house with her bundle-of-nerves orange son, Tonic, but they're both still pretty feral. I can't get near either of them. But every once in a while Gin will come into the room I'm in to check things out. In another few years she might trust me.

Posted by Theresa B (of Nebulopathy) at 8:16 PM