In The Before Times

I used to have a grocery routine. Every Saturday evening around 9pm, I would either drive or walk the dogs to the store with the cart. One fifteen minute cruise down the aisles later, I'd be done. Boom. It was a regular Saturday evening thing and I knew all the cashiers and we would spend a few minutes talking.
Then COVID-19 hit and suddenly grocery shopping might be a problem. Maybe. Unless it wasn't. Who knows? Luckily, Nugget has had an "everybody will wear a mask" policy for the last 20 months and in all that time I've only seen one person in the store without a mask. But it's still a closed building with a bunch of strangers who may or may not be sick.
For a while I was eating a lot of DoorDash meals, but then I switched to cooking nearly all my meals. I got a CSA box of produce (and certain other stuff I select) delivered every week. With bread and eggs delivered along with my veggies, I don't need stuff at the grocery store.
So now I go to the grocery store once a month, often early in the morning. I don't know any of the cashiers any more (at least not the ones working early morning shifts) and it's not really the social outing it used to be. I keep putting it off. I haven't been since before Thanksgiving.
But I have to make food to take to my sister's house on Tuesday, so I'll be going tomorrow and I'm kind of dreading it. It's amazing how something that was a part of my routine has turned into a chore I've been avoiding for a week. 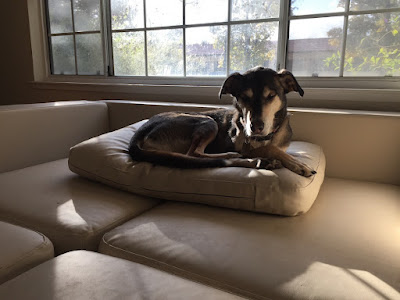