Let's Not Be Exclusive, Okay?

Almost all of my books are available widely. No, you probably won't find them in a physical bookstore (unless you special-order them), but you can buy them online — at Amazon, but also at Barnes & Noble, Kobo, Apple, Google Play*, and places like indiebound.org which sell paperbacks. And libraries through services like Overdrive!
My income might go up if I made them exclusive to Amazon, because then I could put them in Kindle Unlimited (KU), which is Amazon's subscription reading program. For $15/month (or whatever it is now), you can read all the books enrolled in Kindle Unlimited you want to. It's a great deal if you read a lot.** Authors get paid a certain amount per page read (last month it was something like $0.0044/page, but it changes every month).
So why don't I have my books in KU?
As an indie publisher, I can only put my books in KU if they aren't available in ebook form anywhere else. (Note: this isn't true for traditional publishers. They can put their books in KU and all the other ebook retailers and I try not to think about that too often so steam doesn't come out of my ears.)
So if I put my books in KU, I have to depend on Amazon completely. And every once in a while, Amazon will just screw up someone's account. Or find a KU book on a pirate website and remove the actual author's version from the Amazon store for violating the exclusivity clause.
It's rare overall, but if it happens to you, you're basically screwed. You've lost your only source of income, and worse, your readers are now inaccessible when you release the next book — some KU readers will buy individual books, but most will only read books available in KU.
I do have my books in Kobo Plus, which is Kobo's version of Kindle Unlimited, because Kobo Plus doesn't require me to be exclusive. I'm hoping someday somebody sues the bejeezus out of Amazon and they make KU non-exclusive, but I don't see that happening anytime soon.
(But I did put the ridiculous SF/mystery/erotica novella in KU because I didn't want to spend time figuring out which of the other retailers will accept erotica. Some don't. And in two days, it's already made the same amount of money in KU page reads as it made in episode reads in Kindle Vella after two months.)
---
* After over a year and loading seven books on Google Play, I finally sold one there last week. Yes, there's room for improvement in my sales there.
** Libraries are an even better deal than KU. Support your library! 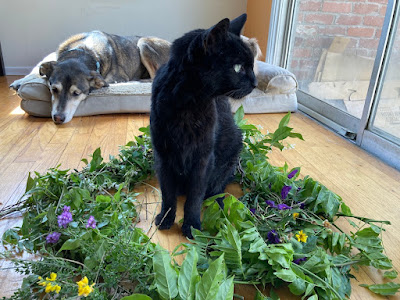 Ripley was one of the best cats ever. In almost 17 years (? he was a bottle baby I raised, but I can't remember what year he was born), he never met anyone (people, dogs, cats, birds) he didn't want to be friends with.
Posted by Theresa B (of Nebulopathy) at 6:12 PM

Your mention of your books being available on Overdrive sent me searching... your books aren't available through my library, but I put in a "recommendation" to buy them. Probably nothing will come of it, but who knows?

It would be great if they did. Thanks for trying, in any case!