Finished the rough draft read-through last night, added the three remaining scenes this morning, and I was about to ship the thing off to my critique partners (hey, it's only a week late...) when I realized I still had to assign chapters. Luckily that's pretty easy, so I finished that and ::dusts hands:: that novel is out of the way for a bit.
(Ugh, I just remembered I still need a title for it.)
Now it's on to the next thing... which should be adding an ending to the first season of the Vella series, but I need a break from endings for a day or two. So I'm going to study some stuff related to writing craft and maybe noodle a bit on a serial I'm writing to practice some things I've learned.
I'm my own boss. I can do this sort of thing. 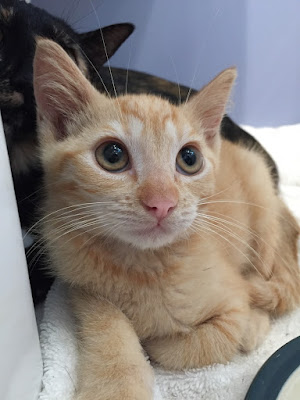 This is an old picture of Tonic. He lives in my house. He's lived here for over two years now and I really only see him through the window to the cat porch. Maybe someday he won't be terrified to be in the same room I'm in, but today is not that day...
(His mom, Gin, is behind him. She also lives in my house. She won't let me anywhere near her, either, but as long as there's at least six feet between us, she'll often stay put. I think she may someday learn to like me.)
Posted by Theresa B (of Nebulopathy) at 2:56 PM