As a person who lives alone, I tend to get in a habit of eating the same thing every day for a while, and then I'll switch to something else. It makes shopping easier and fewer fresh ingredients go bad because you just use the rest the next day.
But the other day it was dark and gloomy, so I took a break from my current routine (hummus sandwich + zucchini for lunch, zucchini/egg/fake fish fillet for dinner) to have a can of soup. And I realized the soup had expired in 2019.
So clearly it's time to eat some of the staples I keep around in case of emergency. That's what I've been doing this week. For the most part, my meals have been pretty uninspired — a lot of canned soups are pretty bad, and some of the other mixes are pretty random.
Tip of the day: Sambal oelek (an Indonesian chili paste) is a great ingredient to fix a tasteless meal.
Anyhow, over the weekend I used the last of the container of wild rice that's been in the meat drawer of my refrigerator for a while. (All the dry goods go in the refrigerator meat drawer. What else would I put in there?) And by a while, I mean I don't remember the last time I used it and I have no idea when I opened it in the first place. It tasted fine and only required a little sambal oelek.
Today I went back and looked at the container. Best by August 2013.
If the wild rice has been in my refrigerator for ten years, I don't think it's really wild anymore, merely feral. 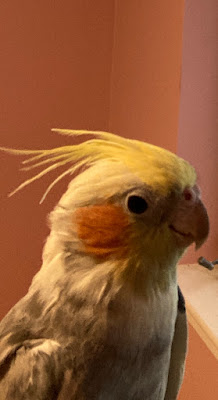 Yes, this is kind of a terrible picture, but in my defense — have you ever tried to take a picture of a bird that flies away every time you bring the phone near? I mean, part of the problem is that I'm a terrible photographer, but my subject was being uncooperative.
Posted by Theresa B (of Nebulopathy) at 3:42 PM

I went through most of my old food early on in the pandemic. Almost all of it was still edible except the nuts. Go figure.

The idea of feral rice made me chuckle.