Back in the mists of time (aka, when I was in school), I read a lot of books. I mean, I spent nearly all my time reading, but I also read a lot of novels for school. Times and reading lists have changed, but for the most part we only covered of the "classics" which meant a lot of books by dead white dudes (DWDs).
There were two problems: 1) I was mature for my age, but I was still a teenager, and 2) I was not an old white guy who lived in the 1800s (or whenever). Very, very little from those books resonated with me. I think we covered 5-10 books a year during all four years of high school AP English (yes, I read Lord Jim along with four other snoozers over summer break one year) and I can only think of one (Pride and Prejudice) not written by a DWD.
College was not much better. We had a 5-quarter humanities sequence which skimmed parts of the Old Testament, raced through a few Greek Philosophers, and then spent most of the time on Locke, Rousseau, and their buddies. Yep, 4+ more quarters of DWDs.
(I can only remember one book in all of my first 12 years of school not written by a white person — A Tree Grows in Brooklyn. It did not resonate with me in a whole different way. Aside from the racial themes, I knew nothing about urban settings, the time period, or New York in general. I suspect I would appreciate the book more now.)
I think most school reading lists have moved on from this excessive focus on DWDs, at least a little. But part of what happened in my schooling was I sorta learned about theme and symbols and all that stuff, but since the books were just an exercise in tedium, I didn't really see the point. Yes, I could rattle off the green light at the end of the dock was a symbol for hope (because someone had written that in the margin of my used copy of The Great Gatsby), but I memorized what I needed to know and washed my hands of it afterwards.
Fast forward forty years. As part of treating writing as a career, I work on improving. So I was watching one of the conference presentations on craft, and the speaker pointed out that theme is the difference between watching a movie that's okay but forgettable and watching a movie that you remember weeks later.
And something clicked.
So I guess this is a letter to all those English teachers who were really trying their best but got stuck trying to get me to make connections that I was never going to make purely because of the source material.
I think I finally get it now. 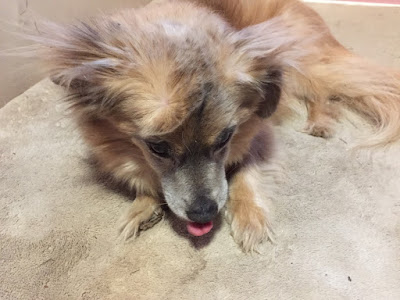 Ah, Ginger. She was always so dignified.
Posted by Theresa B (of Nebulopathy) at 2:54 PM

I taught high school English for 8 years, and one of the things that I gradually shifted on was "the canon," especially in high school. I taught some of that early in my career because I was told to. And to be fair, as an English major, there were a lot of old books, mostly by DWDs, that I grew to love. BUT. Where I'm at now is that the a high school English teacher's job is to make students better readers and writers. And along with that you'd like to foster a love of reading and thinking critically about the world and their place in it.

Whatever books one chooses have to be in service of those goals, first and foremost. As a result I shifted toward teaching a lot more modern works, because reading well is hard enough without imposing the kind of difficulties you alluded to in terms of the language and subject matter.

As an added benefit, when you pick a novel that came out last year, you can almost guarantee that there aren't a bunch of papers floating around out there for students to plagiarize, so they pretty much have to do the work themselves.

College is a little different, I think, and that's maybe more the time to get into the canon, though the canon also needs to be--and I think has been in recent decades--expanded and revised.

I wonder a bit what students at my high school read now, but not enough to go back and visit the place...