I listen to podcasts when I walk the dog (frequent) and clean the house (rare), so I'm always on the lookout for something to listen to. Over time I've realized I'm not a big fan of scripted shows, and true crime drama has never appealed, but there is a lot of great stuff out there.
Without further ado, here are my current favorites:
The Habibis — Their tagline is "Three game developers drinking good Arab tea". They talk about games, the gaming industry, what shows they've watched recently, and usually before they've finished with those topics, they've started telling stories about where they grew up. Full confession: I don't play video games, and I rarely watch television or movies. Yet somehow listening to these three guys talk and laugh together is so interesting and wholesome that I look forward to every episode.
The SPA Girls — In this case, SPA stands for Self-Publishing Authors. I found this one relatively recently. Four women from New Zealand talk about indie publishing and writing in general. Clearly, they know each other well and it's fun to listen to them banter.
Coffee Break Spanish — (They do other languages too!) My Spanish is terrible, but I get a lot out of these episodes. The hosts go over the story of the day multiple times, pointing out grammar oddities, or cultural tips that might not be obvious. Highly recommended!
Writing Excuses — "Fifteen minutes long because you're in a hurry and we're not that smart!" This one is geared more toward the craft of writing than publishing (though they do occasionally cover publishing info as well).
So far I have held off on my threat to start a podcast called "Theresa F*cks Up Publishing", but if the pandemic keeps going another year, I may do it after all...
How about you? Do you have any podcast favorites? 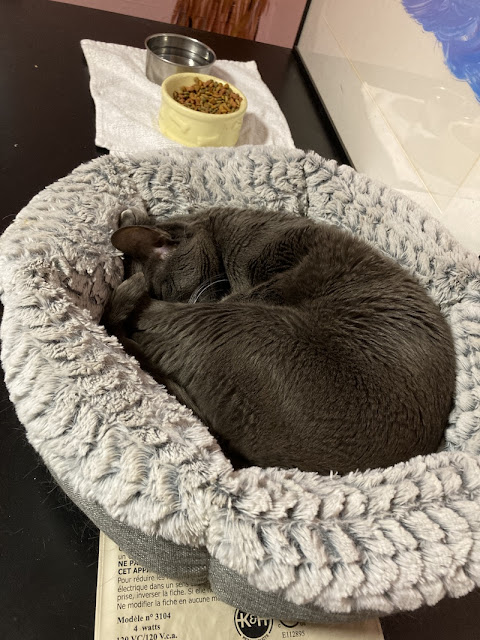 Everything the well-kept elderly cat needs: a heated bed to sleep in, and food and water two steps away. As a bonus, my desk is just to the left of the frame, so he can wander over and yell at me any time he wants to.
Posted by Theresa B (of Nebulopathy) at 6:28 PM