All the Examples Must Be the Same

I attended a writing conference (virtually) in November in which most of the presentations were recorded. Since then, I've been slowly catching up on all the presentations I missed. (They had about 5 tracks running concurrently, so there was no way to go to all of them, even if I'd done nothing else.)
As with most conference presentations, some were really helpful, some were probably worth more to people in a different position than I'm in, and some were just useless. Is it entertaining to hear some old dude namedrop during anecdotes about authors who published in the 1980s? Sure. Is it at all useful? Absolutely not.
But one of the things I noticed was how many people based their presentation examples on two books/series. And I get it. It's hard to find books that everyone has read. But I swear 90% of the presenters based their examples on The Lord of the Rings or Harry Potter, and in most cases they were basing things on the movies, because even in a group of authors, people are more likely to have seen the movies than read the books.*
Here's the problem: Despite reading thousands of science fiction and fantasy books, I've never made it through Tolkein. And I watched The Lord of the Rings in the theater with people from work and was so bored I was counting ceiling tiles and hoping all the characters would just die so we could leave. I read maybe two of the Harry Potter books when they came out and fell asleep during the first movie. (And honestly, JKR has shown herself to be such an asshole that I'd be happy just to see the whole series disappear at this point.)
If someone could tell me the secret to writing like Martha Wells or Ann Leckie? I'd be all over it.
So now I'm watching these presentations, trying to get something out of them and hoping anything I'm learning isn't going to be the kiss of boredom to my manuscript.
----
* Please note, I'm not saying you can't enjoy The Lord of the Rings or Harry Potter. You're allowed to have your own opinion. I'm just saying I didn't think they were very good. 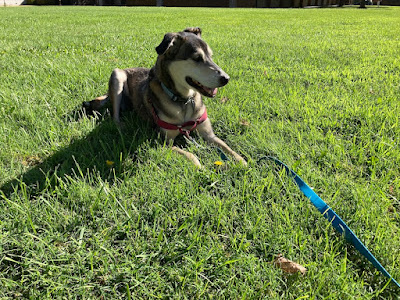 Remember when it wasn't gloomy and cold all the time? Georgie remembers!
Posted by Theresa B (of Nebulopathy) at 6:03 PM

I also find LOTR boring. I get that people like the characters, but as Kevin Smith once said, they're about walking. Nobody needed nine hours per trilogy of these plots. Harry Potter has great worldbuilding and good characters but middling writing, and these days one should probably drop HP references because JKR is being such a turd.

That said, I certainly get why they are picking the most popular of popular culture examples that have been around for decades if they want most of their audience to know what they are talking about. Those books probably have more fans than Ann Leckie, historically speaking.

Yeah, I get why they use those two, but ugh.

If you find a conference or presentation to teach you how to write like Ann Leckie, I'm all in.

Right? One of Cat Rambo's online classes has Ann Leckie talking about space opera. It's hilarious and helpful in thinking about that particular genre, but unfortunately it did not magically give me her powers of writing.