Aside from a slowdown caused by what looked like cleanup from a chemical spill, the drive back home was uneventful. I had a little over seven hours left on the audiobook (Wildfire by Ilona Andrews), and it finished right as I got off the freeway in my town. I even got home early enough to pick up the dog from camp.
For the drive back, I chose a book I'd read before because on the way down, I was listening to an audiobook that really wasn't doing it for me. Around the time I hit the grapevine, I realized I strongly disliked both main characters and I sort of hoped they would kill each other. But I had no way to change what I was listening to unless I pulled off the freeway, so I listened to another few hours before I made it to the hotel because I just wanted to get the drive over with and I wasn't stopping for anything less than the car erupting into flames.
(In case you're wondering, it was Rock, Paper, Scissors by Alice Feeney. Taste is subjective — this might still be a book you enjoy. My only real complaint is the scenes with the dog. I would be shocked if anyone involved with the book had ever owned a dog before, because those scenes broke my suspension of disbelief.)
Anyhow, the bird was excited to see me, the dog was excited to come home, and the two feral cats... are hopefully somewhere in the house. I am the unlikeable character in their story.

He's very happy to have his bed back. 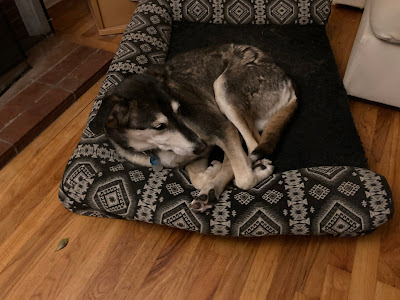 Posted by Theresa B (of Nebulopathy) at 6:27 PM