On my afternoon stroll, I went through the town cemetery. I'm not someone who understands attachment to the dead — for me, a body's just a collection of organic matter, and after death it's all up for grabs for whatever organism needs to use it. Or it should be — I try to be respectful of other people's beliefs on the subject, but I will never understand poisoning the earth with embalming chemicals to keep a body from breaking down naturally.

All that is to say that I don't make pilgrimages to cemeteries because I know people buried there. But this cemetery is within walking distance, and since there aren't any roads running through, it's a quiet place to walk.

Modern cemeteries favor conveniently flat grave markers the landscapers can just mow over, but this cemetery dates back to the 1800s, so it has more upright grave markers. 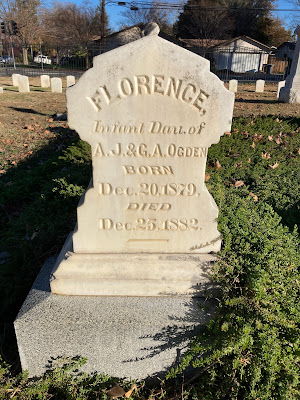 Even a mausoleum or two 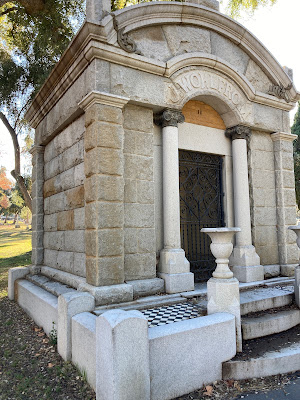 There are rows of men who died in WWII — there may be victims from other wars in some other part of the cemetery as well.

Lots of names I recognize from streets and buildings around town.

It's a lot easier to find the graves of men than women, though presumably just as many women have died since the town was founded. But the men got big gravestones that lasted, and the women got a little plaque nearby that said "Mother", as if that was their only purpose in life, and the plaques have mostly disappeared under the leaves and dirt. Or maybe the men died first and their wives just got added to the plot later. Either way, it would be easy to believe there were very few women around if you didn't look closely.

Posted by Theresa B (of Nebulopathy) at 3:55 PM

Cemeteries are interesting windows into the past, but like you, they don’t really resonate with me. I never visit my father’s grave and I don’t plan to be buried (burn me up and do whatever with the ashes). But there IS something neat about cemeteries, especially ones you’re connected to in some way. Like the one attached to the church I grew up attending, which contains a number of my ancestors, plus the ancestors of people I grew up with. To see those names and see the echoes of the present… though it seems like mostly that community of my childhood has scattered to the winds.

I think seeing the surnames of people you know helps connect you to a place. The area I grew up in had no connection to its history at all — I think that's part of why it feels like everyone is just passing through on their way to somewhere else.

It's a double-edged sword though. I went back for my high school reunion and reconnected with a bunch of people, including a number who either never left or left just long enough to get some kind of professional credential and then settled down in our smallish rural hometown. And I thought "wow, there's something kind of cool about this. Like, these people have been friends continuously since high school (we're in our mid-40s), raised their kids around these old friends and around family... that's pretty neat." But I also spent some time in my hometown thinking "My god I would go crazy if I lived around these people 24/7." As much as I wish I were more connected to the small city I live in, I DO like small city living more than small town living on the whole.

I love cemeteries for some reason. I feel they're likely the least haunted places because people don't die in cemeteries, they always die elsewhere. So! No ghosts in cemeteries!

I'm not sure what will happen to my earthly remains when I die. I mean to be have my organs harvested, then have whatever's left be used in a medical school, then the remainder of that dropped into a body farm. It's all for science, you see. And education.

I'd prefer to have my body go into a wood chipper and into a compost pile, but apparently that's not legal in most states. Bummer.