Today was once again "bathe the kittens and bleach the bathroom" day, so at least I got one thing done.
I also wrote up some notes on what I need to fix in the cozy mystery. Overall, I like how it turned out, but I need to make the first chapter stronger and fix some inconsistencies.
One thing I still need to do is write up a family tree for both sides of the wedding party. I got partway through drafting the novel when I realized I'd accidentally made the victim related to one of the suspects, which was bad because he shows up to start an affair with her. That absolutely was not where I wanted to go with that. So there's a note in the original draft that says "Make Ashley one of Brian's relatives." I have to go back through and change earlier references.
I also realized that I named a new character "Brian" and then brought in a recurring character, also named Brian. All the names in the world, and I have two people with the same name in this novel. Clearly new-Brian needs a different name, but I can't just do a search/replace on all instances of Brian without screwing up the places talking about old-Brian. Ugh.
My margin notes always make me laugh, because they range from the obvious ("Fix this sentence.") to the irritated ("Be consistent with the periods and then document it somewhere dammit."). Sometimes I can't describe what needs to be fixed, so it gets a "Meh".
Anyhow, it's mostly good and I think I know what I need to do to improve the beginning. After I write a story and before I read over the first draft, it's Schrödinger's novel — it might be good or it might be terrible. This time the novel gets to live.

Let's hear it for this brave sunflower which has made it through multiple nights below freezing and is hanging on until the winter solstice. We salute you, messed up flower! 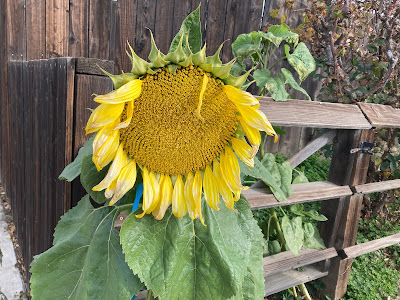 I have so many novels with notes like those. And names are always my nemesis.