Speaking of three minute tasks that I've been avoiding... There were a bunch of dead bugs in the light fixture in the kitchen and I thought the cover was going to be glass and heavy, so I've avoided touching it for twenty years.

Turns out the cover is light plastic and I was able to take it down, clean it, and put it back up in just a few minutes. The change isn't quite as impactful as I thought it would be because it's not dust that's blocking the light but the fact that two of the four fluorescent bulbs aren't working. I guess I should probably replace those, but that requires a trip to the hardware store, so...

I'm not sure how much longer this dude will be around, but 20 years is a good run. 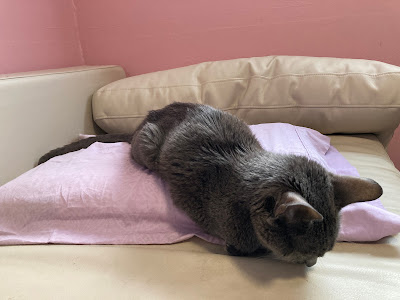 Posted by Theresa B (of Nebulopathy) at 1:16 PM

If it helps any, I left a cover off a light fixture in the bathroom for at least 10 years because the bit that screwed into the base was so stubby, I couldn't get it back on. A few years ago I thought I better try it again, and I found all I had to do was turn the thingamajig to lengthen it enough to allow me to easily screw it into the doohickey.

Twenty years is awesome but I'm pulling for 21! No, 22 at least (because even numbers are better).