I was watching a new show today ("Perfect Murders", aka "Crimes Parfaits") with subtitles because I only have three words of French.
The description of this show is "Quirky investigators team up to solve impossible crimes in this fun French mystery series." Every episode starts out with an extended scene (~5 minutes) of someone getting murdered. I'm not sure they really nailed the vibe of the show in that description.
Anyhow, at the end of one episode, the word "garrigue" showed up in the subtitles and I wondered why they had left that one word in French. But then I looked it up and found out we have conscripted it for use in English. Collins defines it as "open shrubby vegetation of dry Mediterranean regions, consisting of spiny or aromatic dwarf shrubs interspersed with colourful ephemeral species". Apparently, it's a thing that comes up a lot when people talk about wine.
Wine Enthusiast says "Garrigue is a classic example of terroir, the notion that aromas and flavors in wine are influenced by the environment in which wine is produced."
I know almost nothing about wine, and it's always interesting to run into stuff like this — one new word leads to a glimpse into a subculture that opens up into a whole new vista. My #4 Learner is all about this sort of thing. Maybe I'll figure out a way to put this in a book so I have an excuse to learn more about it.

Look at the bark on this tree I found today while walking the dog. How wild is that? 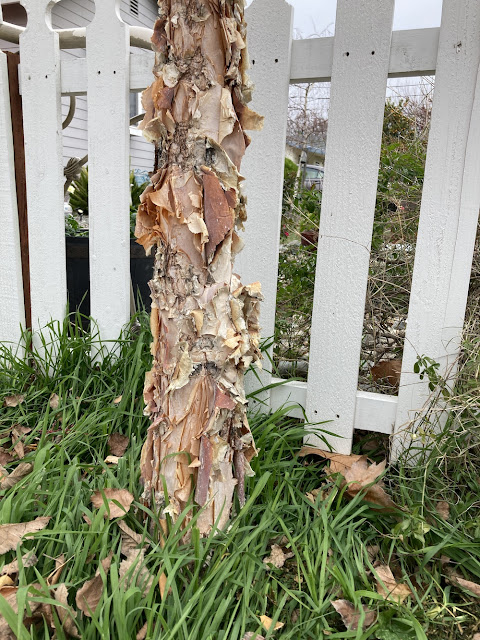 Posted by Theresa B (of Nebulopathy) at 7:24 PM

Terroire is my favorite wine-related word, since it is so close to "Terror" and makes me think Lovecraftian thoughts.

I've never been a wine drinker, so that was a new concept for me as well! (Not the Lovecraft part, but the real meaning...)