It's Not My Fault

Okay, I know I make jokes about my inability to follow directions all the time, and I've always assumed my baking disasters are due to that. And honestly, they probably are.

When the butternut squash was still nearly raw after 45 minutes, I put the digital thermometer on the tray.

This is the oven dial. Note the preheated light is on, which means it thinks it has hit the temperature I set (425° F).

And now look at the digital thermometer. (Ignore the bottom number — that's for the alarm.) 242° F! It's barely half the temperature it should be. No wonder things always take longer than the recipe says. 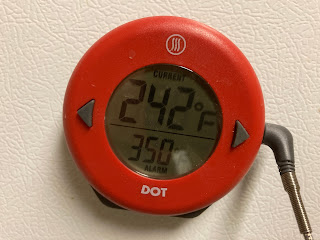 I thought I was running into problems with different areas of the oven being hotter than others, but this says there's more going on.

I will just add here that it's entirely possible it's not working because something needs to be cleaned. I mean, I don't think anything has ever spilled in my oven and it looks clean to me, but I haven't run the cleaning cycle... maybe ever? I don't remember the last time anyhow.

Anyhow, I guess I need to google some stuff...

Posted by Theresa B (of Nebulopathy) at 5:36 PM

Oh dear. Clean that oven immediately, before it runs away.

Technician Google is not giving me a lot of confidence that a cleaning cycle is going to fix this...