Update to Unlabeled: When I was washing the Talenti container, I realized I had labeled it "Pumpkin 11/2022". I'm not sure if that makes the whole thing better or worse...

I have a Patreon. If you're not familiar with Patreon, it allows fans to give a creator a small amount of money every month. In return, the donor receives something like early access to serial episodes, or exclusive maps or pictures.
For those people with their "one thousand true fans", it can pay the bills. For me... well, it pays for the people I support on Patreon plus a cup of coffee or two. Financially, it doesn't make a lot of sense for me to have one at this point given the effort involved. But because I promise to send my patrons two "digital bonus" items every month, it forces me to come up with something small every two weeks. It's a fun puzzle. Most of the content will eventually be offered to my newsletter subscribers, so it's not wasted.
Anyhow, I'm planning to write a short story for the next digital bonus. I think I want to do something that comes after the events of Dragon Freehold. The good news is that book has many things that didn't get tied up at the end of the book avenues for exploration, so I could easily write five short stories that tie in.
At the end of the novel, they know there is a dragon egg out there somewhere and Lisette is on the hook to find it, so I think that will be the main action for this story. Now I just need to figure out the personal problem to get resolved while Remy and Lisette (and Simi the cat) are stealing the egg. I thought I had something, but that involved a third party — it's hard to have a satisfactory resolution to a problem if one person isn't there.
So... I need to think for a while. Maybe I'll put on the Podrunner podcast for a soundtrack and go clean the back room.

I pull out my phone to take a picture and he looks the other direction and closes his eyes. It makes me laugh. 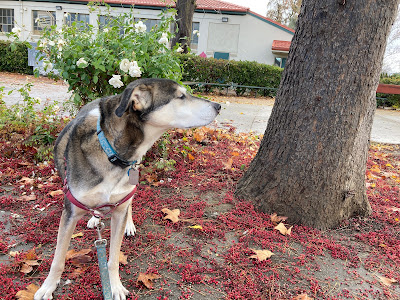