Perhaps you've heard of a lemontini, aka the lemon drop, which is a vodka cocktail that has a lemon flavor. I'm not a big drinker so I've never had one, but it sounds pretty good.

That's not what we're talking about today. No, today's topic is the Lemontina. (Name courtesy of my friend Hilary, who doesn't have two kittens with ringworm living in her bathroom probably until the end of time.)

Her official name at the shelter is Tina. She was one of two unrelated kittens who came in with ringworm at about the same time. Keeping kittens separate is always sad — they end up poorly socialized and don't grasp the concept that biting others can hurt — so the shelter bundled them together to be fostered together.

Yeah. I knew that one going in. She had bald patches, though her other fur hid them pretty well.

I'd had her a couple days when I had the whole "one of these things is not like the other" thought. One eye was the normal kitten blue/green. The other eye was darker. Cats can have differently colored eyes, but I could also see a little wispiness on the cornea. And changes in the color of the iris can be a sign of uveitis, a form of inflammation that can often be caused by more systemic illness.
I was pretty sure this hadn't just happened because she wasn't squinting or showing any pain, and she could see just fine. In my defense, the kitten has ringworm, so I wasn't handling her as much. I felt better when I sent my "uh, is there something wrong with her eye?" email, and got back the response that nobody had noticed it in the shelter, but her eyes were different on her intake photo.
I was told the shelter's vet thinks it's a congenital abnormality.

Margo was a week or two older than Tina, and a bit bigger, but they were close enough that it shouldn't have been a problem. Except then this happened: 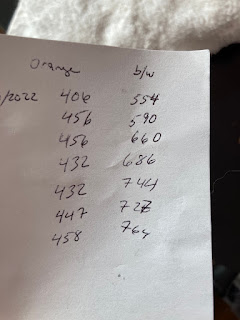 This shows their daily weight in grams over the first week, Tina on the left, Margo on the right. Margo gained 210 grams. Tina gained 52 grams.

There was nothing obviously wrong with Tina — she ate and she had normal poop, but she just... didn't gain much weight. By the end of the second week, Margo was twice Tina's size.

About that time, I was emailing the foster coordinator the latest update when I saw that Tina was only using three of her legs. I'm still not sure if Margo played a little too rough or if Tina got her leg caught on something, but she wouldn't put any weight on her right rear leg.

She's too small to safely anesthetize for x-rays, and too wiggly to get a diagnostic x-ray when she's awake. Plus, there's not a lot you can do to fix things at that age — a splint that slips can cause more harm than good.

I was told to keep her in a confined space, which was kind of funny since she's living in the bathtub and it doesn't get much more confined than that.

I've had her for about two months now, and she's finally gaining weight. Her eye hasn't changed. Her leg is a little better, but I think there's probably some ligament damage — it's not slowing her down much, though. She can jump onto the top of the carrier now.
The only real problem at this point is the ringworm. Despite twice weekly lime sulfur dips and daily oral anti-fungal medicine, her last two ringworm cultures have come back positive. She needs two negative cultures in a row to be considered cured. That means she's here at least another month. In the last week she's developed a huge bald spot on her ear.
Fingers crossed she doesn't develop any new problems...
PSA: Lemontina Tina will be available for adoption someday from the Yolo County Animal Shelter. She's very sweet and maybe she's burned through all her bad luck and will have no medical problems ever again! She could be your perfect companion! 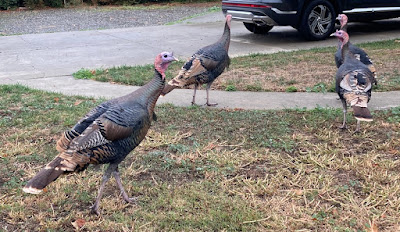 Posted by Theresa B (of Nebulopathy) at 1:07 PM

I hope she is better soon. I’ve watched them play on the kitten cam a couple of times and she is definitely the quieter of the two. She seemed to want to be left alone to groom herself.

I should record what happens in the evenings when I let them play in the rest of the bathroom — they take turns chasing each other all over the place. Tina definitely sleeps more, but that might be age-related. She's a few weeks younger than Margo. I think everything is going to work out as long as we can get her ringworm under control...