When asked to describe myself in one word, I usually go with stubborn. And it's true. Stubbornness is baked into me. I get through challenges purely because I won't quit. (Cf. eight years of NaNoWriMo)

Another word that could also be used is oblivious. I often just... don't notice things. This is especially true if I'm concentrating on something else.

This afternoon, for example, I was working in my home office, and there was a bunch of really loud noises in front of the house. I will attempt to recreate my thought process below:

Is anyone still using this table? What are the dependencies? Oh, I think I can --

Weird, that sounded like a gun, or maybe a backfire, but it was too loud to be truck backfires and the rhythm was all wrong for that... But I think I can get rid of this table and that will be one less thing I have to worry about with the upgrade this weekend.

I had completely forgotten about what were clearly gunshots right in front of my house until about fifteen minutes later when I noticed red and blue lights out front. They had the street in front of my house blocked for an hour while they were looking for something (bullets? some other weapon related thing? I have no clue).

But I notice the important things...

I had (of course!) gone back to work, and the police were still there when I got up to get a Diet Coke from the stash in the living room. Then I saw a big black dog trotting down the street, with nobody near him. The cops were ignoring the dog while they searched the gutters, so of course I went outside to grab the dog, because I always go outside to try to grab the loose dogs that run by my house so they don't get run over. Only after I was on my front lawn did I realize that it was a police dog on a long lead searching for evidence. Oops.

So, anyhow, I'm sure I'll be the first to go when the zombie hordes ravage the countryside, but that's just the way it goes!

In other news, look who was awake during picture time today! 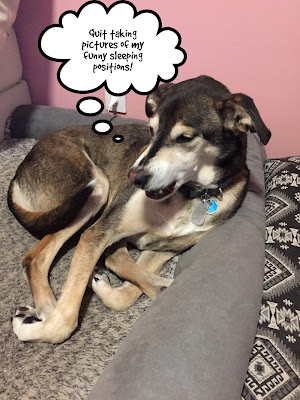 Posted by Theresa B (of Nebulopathy) at 6:01 PM

I can be mighty oblivious too, mostly in the realm of not noticing changes around me. My husband realized pretty on that he can hide things in plain sight and I'll never see them.

In some ways it's a curse, but in other ways it really is a blessing.