As mentioned a few posts ago, November was National Novel Writing Month, and this was my eighth year participating. (At least, I think it's year eight. The website says eight, but literally every other piece of information they copied over from the old websites when they rewrote and consolidated is wrong, so I may be foolish to trust this fact. But it's got to be close.)

We'll Have a Plague Old Time!

Last year a death in the family meant I was scrambling to catch up at the end. This year I finished a day early. It was a little odd, not having any in-person write-ins. I miss hanging out with my local group at crepe restaurant in Davis, or the coffee shop here in Woodland. There are usually around 5-10 people that show up fairly consistently during November, and some of them I don't see during the other eleven months of the year. Still, we got together for virtual write-ins, and hopefully I'll see them all next year.

To make it to 50,000 during the month, it's an average of 1,667 words per day. I know some people who can dash off 1,000 words or more during a 20 minute sprint. They can put in a couple of hours on the weekend and stay on top of things.
Not me. I'm a plodder. If I'm not distracted, I can hit 500-700 words per hour fairly consistently, but that's about it. So the only thing I can really do is put in the time. And that means every day. Thus, it's probably not a big surprise that my daily graph looks like this:

The light blue line is the 1,667 per day suggestion; the dark blue line is my word count. Sometimes boring is just fine.
The book (second in what I've been calling the "sheep heist space opera" series, though this book has no heist, few sheep, and takes place on a planet) is not done. I think it will end up somewhere around 70-80k words, though the barf draft may end at 60k since there are a few chunks that will need to be wedged in later. Someday I may figure out a planning process that works for me. This is not that day.
But this is a win for 2020. I'll take it.

Somebody needs to explain to me how he manages to sleep in these poses. I just don't understand how this can be comfortable. But he's snoring right now, so I guess it is. 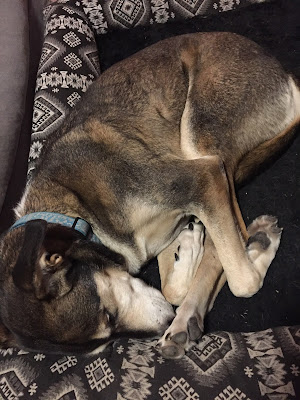 Sometimes I can’t keep myself from straightening a leg or untucking a paw that’s at a weird angle. I always get a dirty look.

Congratulations on another successful NaNoWriMo!