Today Ginger went to the groomers to get her annual "little fluffy dog maybe she should come in more often" bath and brush-out. I'd made the appointment Thursday, and it turned out to be prescient because Friday night the big dog (accidentally?) peed on her head while aiming at a bush. 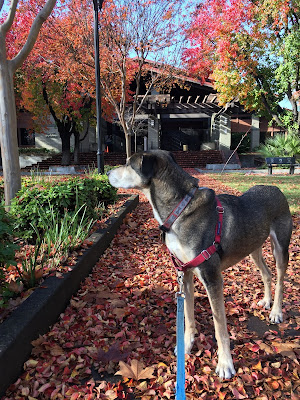 Anyhow, I walked both dogs downtown and dropped the little dog off and then Georgie and I wandered around. Turns out that with a big dog, wearing jeans, my 22 year old coat, and a baseball cap on my head keeping my hair out of my eyes, I make the security guards hired to keep the homeless away from shoppers downtown sorta nervous. So we walked over to my favorite coffee shop to get hot chocolate, then wandered around at a slightly faster pace. 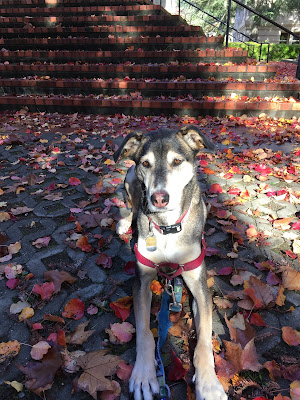 Georgie kept trying to go back to the groomers, almost like he missed Ginger which doesn't make a lot of sense. At home they pretty much just ignore each other all day long. Usually their only interaction is if the big dog is sitting on a bed the little dog wants -- she'll run over and hump him until he gets up and moves. Really. That's the only time they seem to notice each other. 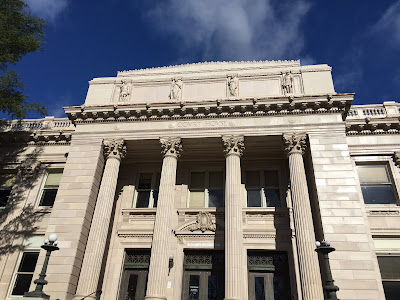 Finally we went home, at which point the groomers called and said Ginger was ready, so we walked back and picked her up. She's very soft and fluffy now. (And I forgot to take pictures, oops.)

The big dog was overjoyed to see the little dog.

The little dog was overjoyed that she got to leave the building.

We all came home and took a nap.

It's Holidailies time!
Posted by Theresa B (of Nebulopathy) at 7:36 PM

The leaves are stunning. We’re firmly into everything-is-dead-and-brown season.

It really is beautiful right now. Our seasons are a bit reversed in some ways -- everything gets brown over the summer, then we get leaf drop and new growth season around now because of the decreased daylight hours and rain. Next week it will be back to normal grey/brown, but this is definitely the week to take pictures.

I'm envious that you live in a place where you can walk to the dog groomer. I grew up in small towns, and have been suck in Outer Suburbia for far too long. Sorry, that isn't meant to be whiny, merely an observation.

The pictures are stunning.

I grew up in Outer Suburbia, so moving to a small town was an adjustment. But I'm not really that far away from tons of people, and I really enjoy living where I do.

I think this may be the first time none of my pictures have included part or all of my finger. :)

Georgie and Ginger sound a little like our cats. They mostly ignore each other too, unless the little one feels like harassing the big one. That's always fun.

I'm about to be down to two cats and every time their number changes a whole new dynamic appears. There may be a kitten adoption in the new year as an attempt to keep the peace between the remaining two.