At work they're currently implementing a "voluntary separation package", and if you've been an employee for a long time it's a pretty good deal, so a bunch of people I know are leaving at the end of the year.

This is definitely better than the previous rounds of involuntary layoffs (although the packages then were also decent, and there was at least one person sending out pictures of himself with a sign that said "pick me!" -- yes, morale has been at an all time high for the past few years). But it's still a bummer for me because one of the people walking around with that "I'm going on vacation starting January 1st" glow is my brother.

Jeff is better at remembering people than I am. I had to start a file with the names of people I never want to work with again because otherwise I forget who they are. Last Monday, after a week of trying to remember an old director's name I called him up in the other building. "What was that executive director's name? The one who they moved across the country right before she retired? It was something old-fashioned like Irma, but not Irma." He knew the answer immediately. (Eula.)

But mostly it's going to suck because he's the person I send all my work snark to when I don't want to have to think about whether it contains anything that shouldn't go outside the company. So I can send him email that names names, and forward ridiculous requests without making a huge effort to change all the details. 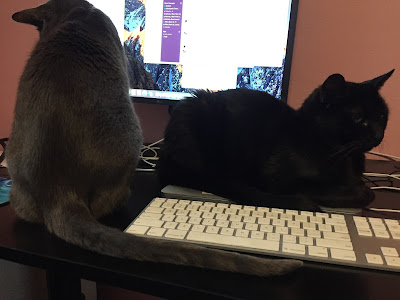 (Here's a random picture of my cats helping me write.)


For instance, every single week HR sends an email with a stock photo of some smiling person that says "It's not too late to get your W-2 sent electronically!" Every week. Because I didn't get the hint the first forty-nine times they sent it this year, but this week I'm going to listen! But since they don't have any way to unsubscribe, or even an email address that we can send complaints to, the only thing I can do is send rage mail to Jeff (which crosses electronically with the rage mail he sends to me).

(We had another program that has been sending out automated messages every night for the past two weeks about some event being over, and one of my coworkers almost hurt himself laughing when I suggested that if they can't stop that email maybe they could at least combine it with the W-2 email. Everybody hates that HR email.)

Anyhow, on Monday I was in the office complaining to my boss about not being able to complain to my brother in the future. He was mildly sympathetic. Or possibly alarmed.

On Tuesday I sent my boss mail suggesting that we could make a device that keeps track of something because I was trying to write a report to figure out where all the equipment was and that was harder than it should have been.

My boss, of course, sent back mail that said a) Are you training me to take the place of your brother? and b) What algorithm are you using for this report?  I'm interested in what you are doing.

Yes, my boss can be a bit of a smartass.

Of course then I sent mail saying "Which part are you interested in? If it's the latter, [algorithm details]. If it's the former..." I attached a video on how to clicker train a dog.

It's Wednesday and I still have a job!
Posted by Theresa B (of Nebulopathy) at 9:46 PM

I'm pretty careful with my snark until I can size up the person I'd like to send it to. My current boss is pretty receptive, but I can't really be snarky to her about bizspeak, because she's fluent in it.

I'm not sure I could work for someone who couldn't deal with some amount of snark from me, but I do try to keep it to a minimum when I'm sending things to my boss because I don't want him to feel obligated to deal with whatever the underlying problem is.

(Unless, of course, I need him to deal with some problem, but in that case I'll just flat out tell him about it.)