Then he dared me to do it.

Anyhow, I sent it off, laughed, got his reply in which he laughed, and then I didn't think much about it. I was kind of expecting at least one of the many people we've both worked with to reply to me with some sort of eye-roll or stupid gif. These people know me. That mail is in no way out of character.

I got no response. 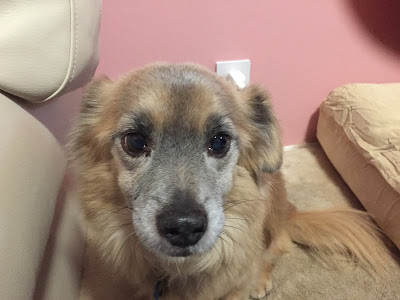 (The little dog worries that we'll be homeless and starving soon.)

Oh well. I still think it was funny. But maybe nobody from my family will be working there in the new year...
Posted by Theresa B (of Nebulopathy) at 7:48 PM

FWIW, I think this is hilarious.

Right? I figure if I get a note from HR it's probably time to switch careers again.

As my husband would say, "Fuck 'em if they can't take a joke."

This is totally how I feel (especially since I knew ahead of time the target was fine with the joke). But... does your husband work for a large corporation? I suspect this goes over better in a smaller company.

(Of course, as far as I know nobody has actually complained, so maybe that's a bad assumption.)