At least I Have a Good Dental Plan

When I was little, my paternal grandmother used to send us a box of cookies and other treats each year. Some of the cookies were traditional German versions, similar to what she'd grown up with, and others were recipes she'd acquired after she moved to the states. One of the traditional types of cookies was springerles.

If you've never had them, springerles are anise cookies that are rolled out and then embossed. I was given a springerle board when I was in my teens. I used it -- once.

I think I've mentioned before that I am constitutionally incapable of following directions. That makes baking... a challenge. It makes baking finicky cookies an impossibility. I spent a whole lot of time and energy making these things.

My springerles ended up half-height and so hard you could crack a tooth on them. Seriously, if I'd built a house from those things, it would still be standing. To this day they're probably taking up space in a landfill, in the same shape they started out in, with some weird embossed shape (leaves? berries? I'm not even sure what they're supposed to be) on the top. 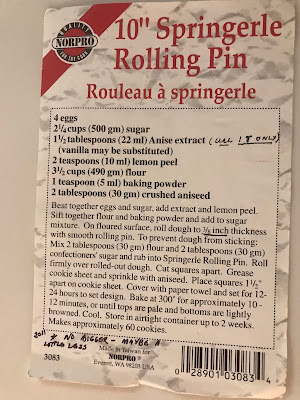 For a while my parents bought the yearly springerles from the German bakery, but at some point my mom took over, and hers always turn out perfectly, probably because she follows directions. (She claims it has something to do with never making them on rainy days, and sure, I'd love to blame my problems on humidity, but it's a lot more likely that it has something to do with my slapdash measuring system.)

Anyhow, I agreed to make them this year. (I also suggested that having a backup plan might not be a bad thing.) I have a springerle rolling pin on the way. I'm crossing my fingers that the grocery store has anise extract. And I'm even going to drag out the gram scale (ie, the small kitten scale) from its hiding place in hopes that it will force me to be more exact.

And if when all that fails, I'll order some from Amazon.
Posted by Theresa B (of Nebulopathy) at 8:23 PM

Good luck! I have a terrible time with cookies that need rolling out in any form, even when I follow the directions rigorously. Same goes for pie crust - just cannot do it.

I have a couple weeks to make this work. I suspect it will take a few tries. (And then a rush order from a bakery.)