Speaking of My Boss

Yesterday I mentioned my boss (H) asking me if I was trying to train him to take over my brother's job of receiving all my irritated emails at work.

Lest you think his email comes out of nowhere, let me give you the history of my texts with my boss.

Before we start, you should know that he is not my boss on paper. As someone whose role doesn't really match that of others in the group, I get moved around every time they need to rebalance the managers so they all have at least the minimum number of direct reports. But H remains my boss for real throughout all the changes.

This can lead to conversations like the following during my annual performance review:

[boss on paper]: To be honest, I don't really know what you do every day.
[me]: Well that makes two of us.

As you can see he manages to deal with me without quitting, and he hasn't fired me yet either. I'm not sure how he's held up so well. I might need to up my game. 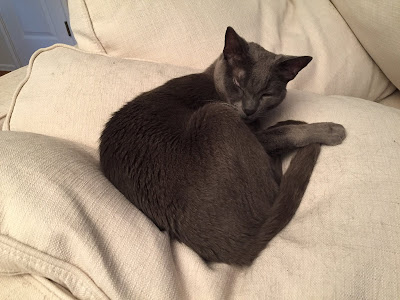 Obligatory picture of my real boss

Posted by Theresa B (of Nebulopathy) at 7:06 PM

I love this! Clone H and send him my way, please.

I'm not sure the world could handle two of them...

Hah! I probably could get away with that with my boss. I once forwarded her an email from Accounting that started with "What fresh hell is this?" and she agreed with me.

That's the sort of subject line I regularly send to my brother!