How Does Anything Ever Get Done Here?

I decided it was too much trouble to get the Nissan Hide Everything out of garage to go for my regular Friday evening coffee shop visit, so I sat down on the couch with my laptop and brought up the Google doc of the story I was critiquing.

Then Ripley came over and tried to sit on top of the keyboard, adding some extra characters in someone else's document while he was at it. I pushed him off to the side and undid the changes and went back to reading.

Then the big dog came over and stuck his nose in my face for a while until he settled down on the other side of the couch.

The Guido got on the couch and would not be denied the opportunity to sit in my lap. 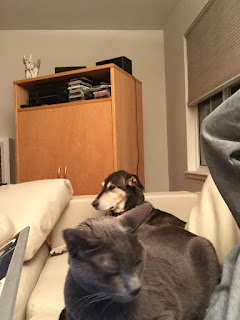 Then Effing Scooter came over, which would have just increased the chaos except Guido took that as a sign that he needed to run after him, and eventually I was able to both see and touch my laptop again.

This is the current setup: 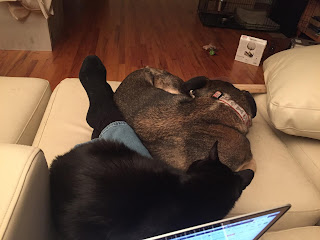 Of course I could probably avoid all this by turning up the heat a bit.

Posted by Theresa B (of Nebulopathy) at 8:12 PM