At some point in the last fifty years I learned to accept that I will never live the way other people do. I mean, I get that it's aesthetically appealing when everything in the house matches, and when art is done by people who are masters of the craft, but it's just not me. I don't put things on my walls unless it was done by someone I know. That someone is usually me.

All this is to say that I was trying to figure out how to put up a string of lights in my living room. I considered just tacking them up close to the ceiling, but I was pretty sure they would just annoy me because they wouldn't be straight. (Because nothing I do ever turns out straight.) Then I decided to incorporate them into linked canvases. 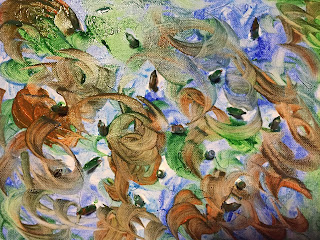 
Anyhow, I attached a bunch of lights to the canvas today. That turned out to be harder than I expected, because these lights are the icicle kind, with a row across the top and strands hanging down. It's harder to place them exactly where I want them, but I persevered. I think I should get points just for using super glue around both my computer and the cats without any disasters. 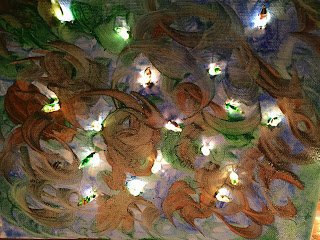 The strand has 300 lights and I used 17. I'll probably run the strand around the outside this canvas as part of the frame (maybe with twigs glued on as the frame?), but my quick calculations are telling me that I could have ten canvases as part of this. We'll see...