Now that it's no longer a zillion degrees out and the fires are no longer making the air hazardous to breathe, I've started trying to run again.

My running partner is pretty happy about this. The big dog would probably go running twice a day if I would take him. He's been known to try to ditch me and go off with people who pass us on the trails. Clearly he's a much better athlete than I am. 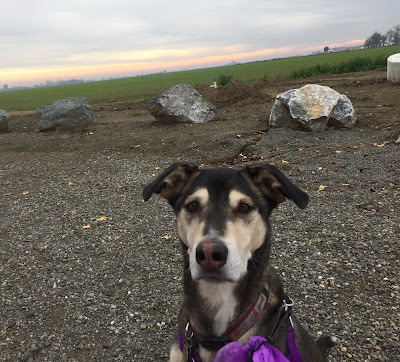 (Post-run. He really, really wanted the treat I was holding.)

The little dog doesn't go along -- she stays at home barking hysterically for some amount of time. I think it's usually less than ten minutes -- she's always quieted down by the time we get back. I'd take her along, but she's not as fond of running and I don't want to have to play Luke in the swamp with Yoda on my back when she decides she's had enough. Plus she has a heart murmur -- it's probably nothing, and it doesn't really slow her down at agility, but it makes me a little nervous to take her on a multi-mile run.

Anyhow, the big dog and I went 2.5 miles today, plus another mile walking to cool down. That's not much compared to what we were doing last winter, but I guess we have to start somewhere.
Posted by Theresa B (of Nebulopathy) at 6:16 PM