Mad at the Meringues

What happens when you get two people who like to tell dad jokes in the same room? Not a lot of writing, it's true, but the question of whether trench coat was one word or two (answer: two) morphed into hyphenation which then led to invention of T. renchcoat, the less than fearsome dinosaur who can't get his arms all the way in his duster.

Also, at one point we heard Jennifer in the kitchen using a blow torch and that spawned the phrase "mad at the meringues" which then turned into a series of cozy mystery titles (Pissed at the pies, etc.).

The test batch of springerles was almost a complete success, except with the person who doesn't like licorice. I think I needed to bake them just a tad longer, but it also may be that they just need to sit for a day or two. Rolling them out turned out to be not too difficult -- it's more like smashing it all flat than rolling something springy like a pie dough. Traditionally the cookies would be rectangles, not circles. Since the special rolling pin won't get here until tomorrow, I made them with non-traditional cookie stamps, but the stamps have German words on them so maybe the spirits of Weihnachten past will forgive me. 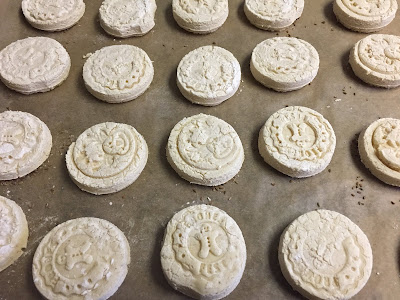 Anyhow, I'm back home and the Nissan Blindspot 360 is once again safely wedged into the garage for the night, so we're all off to bed. 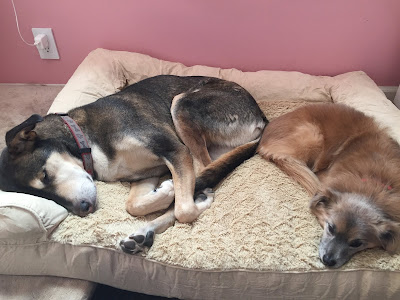