After I submitted yesterday's post on The Big Dog Weight Loss Plan, it occurred to me that the other thing that changed recently (aside from the weather getting colder) was that I put up barriers to keep the big dog out of the kitchen because he kept stealing things from the counter and getting into the trash. Now I'm just brainstorming here, but I wonder if it's possible that that is why he lost weight and therefore staying out of the kitchen should be part of my strategy as well.

Anyhow, in the latest episode of this season on Theresa and her geriatric pets, I took both dogs for a long walk this morning, then we came back and the little dog puked all the treats I'd given her (plus a bunch of water that she drank when we got back) onto two separate dog beds. Now it's six hours later and she showed no interest in showing up for dinner. But one episode of vomiting and half a day of inappetence in an otherwise normal 12 year old spayed little dog is no reason to panic.

Look at me not panicking. 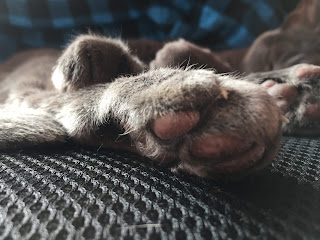 Guido is continuing on his own terminal illness parade by picking fights with all the other animals in the house. It has gotten to the point that Guido just looks at Effing Scooter and Effing Scooter jumps off whatever cozy spot he has taken. Guido seems comfortable enough for the moment, though he suddenly gained a bunch of weight and his nose has been dripping. That might just be because his appetite has been good (yay, steroids!) and he has a chronic herpes infection... or it might be that he's retaining fluid because he's now in heart failure or something equally bad.  At least he's still breathing okay.

Guido and I have been watching a lot of videos on sled dog Twitter together. I'll miss that when he goes.

Speaking of sled dogs, it occurs to me that the big dog might actually enjoy pulling me around on a cart and it would be a good way to get rid of some of his extra energy. I may have to look into this...
Posted by Theresa B (of Nebulopathy) at 6:29 PM