Today I made a stepping stone smaller than my foot. One might call that asinine if the point is to create a path one can walk on, but I'm going to go with whimsical.

Mixing concrete is hard work. There's a reason people rent those big mixers. Very small amounts are fine but anything of, say, shoe box size or greater is enough to make my stirring hand hurt. Other (totally valid!) excuses:
All of this is to explain why I didn't get started on the project for this evening until almost 9 PM and then I didn't  have the energy to do much.

So I made a stone with my initials. I have a feeling the tiles are going to have to be glued down later, but at least they'll have divots to sink into. 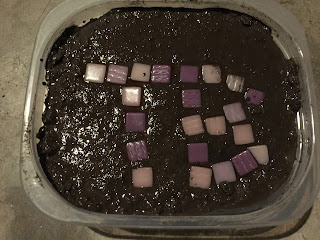