Guide To The Garden

English is not my boss' native language. He's lived in the US for a long time, though, and for the most part he has no problem with it*, but every once in a while I throw in some colloquialism just to confuse him because it makes me happy. A while back I had to explain to him -- in an office with cubicles and no idea of how many people were paying attention -- the difference between "weed" and "weeds". But hey, this is California, so who really cares, right?

Anyhow, on my way to the back of yard to make today's stepping stone (and get drained of all blood by the the mosquito horde), I stopped to pick some leaves to use as imprints. Shockingly, they were all weeds. (Not weed.) I was going to find an example of a plant I actually wanted to grow there, but then I decided it made more sense to have an accurate representation, so I stuck with the weeds. 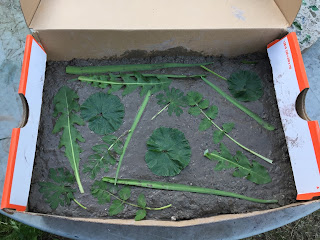 That's the box my new running shoes came in. When I finished my run last weekend my feet were killing me and I thought about it and realized I'd been running in those shoes for about a year. So I bought new shoes. I wore them on my run today and they were fine so I think I'll be wearing them for the 10k in two weeks. 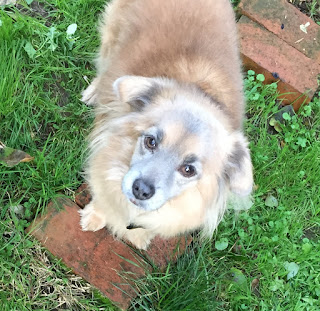 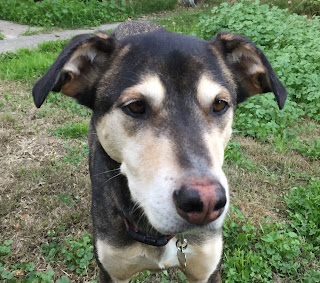 Stats for today's run:
On the outbound leg I planned to turn around at a hazy clump of trees in the distance. I thought they were hazy because the day wasn't clear. Turns out they were a lot farther away than I had assumed. That's why we were still out in the middle of nowhere when my legs decided we were done running.

After we finally made it home the big dog and I took a nap. My quads hurt. I suspect tomorrow is going to be bad...

---
* The one thing that trips him up (mostly because I start smirking) is MS Excel terminology. After years of me making fun of him, he tries really hard to pronounce "sheet" correctly. I haven't had the heart to bring up what his pronunciation of "chart" sounds like...
Posted by Theresa B (of Nebulopathy) at 6:05 PM

I hadn’t heard of Elijah Bossenbroek so I looked for his music on Spotify. It’s wonderful. I worked to it all day.

I heard about his music for the first time a couple of months ago and I'm completely hooked. I wouldn't have imagined that piano music would be very good for running, but it is.