Thingadailies. It's like the neverending story, but with fewer cute furry creatures. And the horse doesn't die.

Remember, the goal is to fail more in this new year. So far I am acing my resolution!

Tonight I mixed in some acrylic paints that I found in the closet. I have no idea what I originally bought them for so I was somewhat surprised to see that they were still in liquid form.

Despite mixing concrete almost every day for the last two weeks, I still somehow added way too much water to this batch. I tried to correct it by adding more dry mix which meant I had to use a different container. I think it was still too wet. Also, I have no idea what adding acrylic paint does to the chemical reactions that make concrete cure. 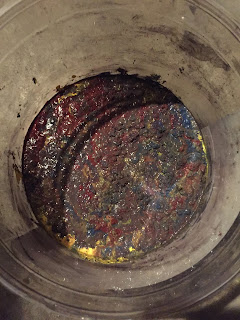 Technicolor Vomit Crumbles Of Death may be my new death metal band. (Buy our debut CD on Amazon.)
Posted by Theresa B (of Nebulopathy) at 9:08 PM

This one could surprise you in the sunlight. If not, it could be fun watching people trying to avoid stepping in/on it.

It's kind of funny how often those exact thoughts go through my mind every evening when I'm out in the garage taking pictures of the thing I just made...