Today was one of those days when you just throw up your hands and say "Maybe it will all look better in the daylight on some other day!" and I'm not even talking about the stepping stone.

Last night I went to the coffee shop to get some things done, but they were having an event, so I ended up staying outside on the patio. They had firepits going, but it was still really, really cold. 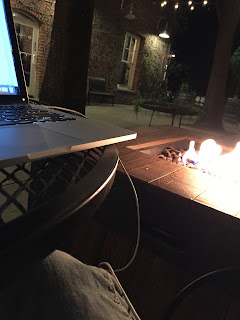 If I'd been any closer to the flames, my arm would have been on fire. It took me a couple of hours to thaw when I got back home.

Because of last night's temps, I wasn't worried about getting my run in early, so I left with the big dog after 11am and I was wearing running pants. After a couple of miles I was getting kind of hot, but I kept going. Then we made it out to the emus and turned around and the sun was no longer in my face and we were running into a breeze and it was pretty pleasant. That's when everything fell apart.

First my music app stopped playing, so I had to stop to get that going again, and then a minute later the wind shifted and the fire that someone had going on the other side of the road (which I think just had branches, but who really knows?) gave off a bunch of smoke that blew into my face. If I'd been walking it would have been no big deal other than the smell, so I didn't even think about it until I found myself gasping for breath a ten feet later. Turns out that a sudden drop in air quality really doesn't help oxygenate your body while running.

I dropped to a walk for the next half mile or so. My right eye wouldn't stop streaming tears, so I kept having to wipe my face, and I was starting to feel dehydrated on top of that and it just... wasn't a good run.

Apparently when the music app died, the running app also took a powder, but it still knew that it was supposed to be recording, so when I told it to stop it sprang back to life and gave me the funniest stats I've seen in a while.

So here are today's stats:
I also used the new "hands-free" leash today -- it has a belt that goes around my waist and then the leash clips on to that. I wouldn't suggest using it with a dog that isn't good on a leash because you would get zero warning before being pulled to a stop, but on the plus side, if I drop dead while running at least my dog won't wander off.

And now, today's project -- first a shot of the artichoke plant that provided the leaves that I've used: 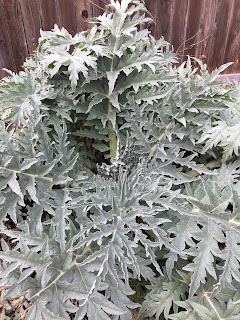 It even handled the hard frost the other night.

I ran out of clothing dye, so I tried to make the outline with some acrylic paint. It's harder to do the outline with liquid paint than with powder. It should at least get an imprint from the leaf. 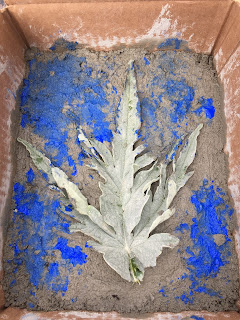 But yeah, maybe it will look better in some other daylight.

Posted by Theresa B (of Nebulopathy) at 7:24 PM

All you need is a story for each stepping stone. Acrylic paint or chips from a peeling ceiling in a church ruin high in the Alps?

Ooh, this is a stone from the Sistine Chapel that was removed before renovations! That will _totally_ fly! :)