One of my co-workers (E) recently moved to a different state, and before he left I went out to lunch with him and his wife (F). They talked about the new house and mentioned the next door neighbor (A) (a grown & married man) who had what what was described as a "man-crush" on the house's former owner (an ex-Green Beret and all-around amazing guy apparently). In fact, A got along so well with the former owner that there was path worn into the grass between their houses. Every time E & F had been to see the house A had shown up, fat little Dachshund in tow.

(At that point I was making siren sounds and telling them to abort the mission, but they'd already closed on the house.)

Fast forward to today. Now that they've had a week to settle in, I sent E mail to see how things were going.

Me: How many times has A come by?
E: None. But F saw him nekkid when he was getting into their hot tub.
Me: You made me snort hot tea.
E: To be fair, our furniture just arrived two days ago so we haven't been in the house that long.
Me: I hear bamboo grows really quickly.

I've been living in my house for nearly 15 years and I've barely even seen any of my neighbors wearing shorts. If I'd just moved into that house I'd be out there digging a moat, setting up a trellis for kudzu to grow on, and there would be black paint on all the windows.

Today's stepping stone is part of an artichoke leaf with some green dye sprinkled over the rest of it. I'm hoping that will make the leaf impression pop. We'll see... 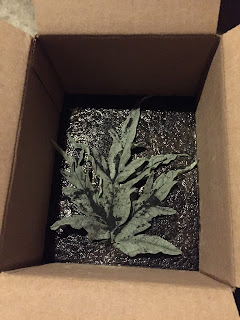 Posted by Theresa B (of Nebulopathy) at 8:47 PM