Another day of Thingadailies (or as I like to call it Thingadaily-unless-I-get-home-too-laties). 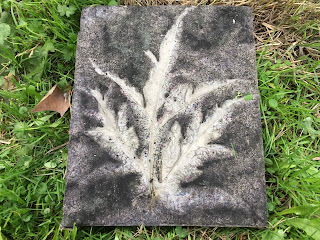 I think even if the dye fades it will still look pretty nice.

The official mold (minus one piece because I didn't mix enough concrete): 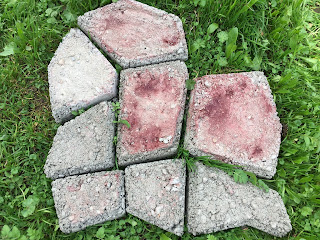 Doesn't look quite as much like I buried body parts in it -- now it merely looks like I bashed someone's head against it...

Then there are these two: 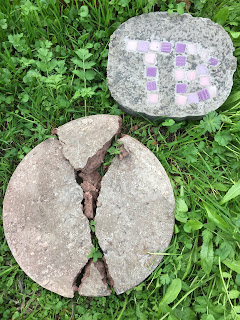 The crumbles on the lower left are the one I mixed with entirely too much water and thought was never going to harden. It finally did, but disintegrated when I put any weight on it. Lesson learned. (Haha, just kidding, I'm sure I'll do it again.)

I do like the little initials piece, but it would have to be a prototype for a stepping stone for fairies or something. (Which would actually be kind of cool, now that I think about it.) I think the mosaic tiles might actually stay in it.

This one is okay, but a little boring, and I think the glass is going to fall out. It's pretty sturdy, though: 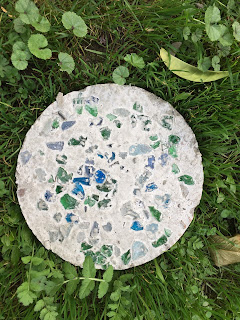 I like this one, but I think the dye around the leaves would have worked better than this: 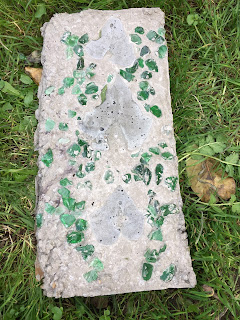 For some reason this one reminds me of archeology. I sort of like it. Also, the little dog was tired of me concentrating on things that were not her: 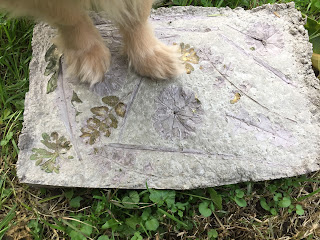 And finally, the new one I did for today. That's black dye surrounding the leaf. 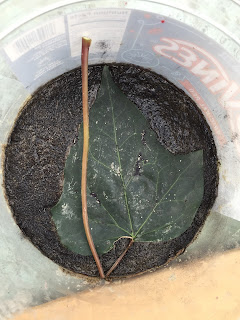 Here are the things I've learned so far:

I read something that said that mortar mix could be used for this and that it creates a smoother surface. It also comes in smaller bags. I'll have to take another trip to the hardware store.

Posted by Theresa B (of Nebulopathy) at 4:22 PM

I believe little dog is telling you what is missing is one with paw prints. These are turning out well. I love the top one!

I've considered trying to get dog paw prints but neither dog likes their feet touched. -- that's a bit of an understatement -- so getting a paw print and then cleaning their feet afterward might be too traumatic.

(Also, I made too many paw print impressions from dead animals in my former career, so it's borderline creepy for me.)