I didn't quite make it to the hardware store to buy mortar mix today. I'd like to have a real thing to blame this on, but the real reason is that I was too lazy. So... yeah.

Anyhow, I was thinking about the throw-away comment I made yesterday about using the tiny initials stepping stone in a fairy pathway, and I realized that's almost exactly what I need -- not for fairies, but for my garden gnomes and the Yeti-holding-gnomes statue that I may someday move outside when I really need the space in my office.

So today I made another step in that pathway.

(And this is all totally not because it's so much easier to mix a very small amount of concrete!) 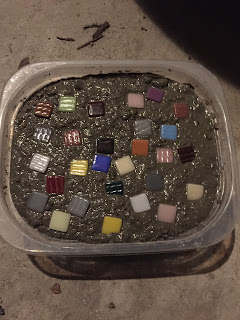 Anyhow, I also went for a run this morning. Since the 10k is next week, my oh-so-scientific plan as suggested by Jeff (who doesn't run competitively, now that I think about it) was to have the big run last weekend and then taper. I ran the big run last Sunday, and then I ended up not running at all for the rest of the week, but I planned on running a nice leisurely 4 miles today.

But then I was running with the big dog and we were finally out of town and on the county roads and I thought what the heck, let's go to the emus and so we did, and then on the way back after we finished mile five the soundtrack switched to "Deliverance" by Rationale and so I had to speed up to match the tempo (except during the parts without a drum beat) and then I had to sprint at the very end of my run because... sprinting at the end! It's the most fun part!

Needless to say, my legs are a little sore.
Bonus picture -- I'm occasionally really bad about maintenance, but these people have permanently parked their Audi in the alley in such a way that it keeps their fence from falling down. (That happens to be the only residence I've ever called animal control on because their big dog got out of their yard, ran down the alley, and attacked my leashed little dog on more than one occasion. Their dog hasn't attacked mine since then, but I also don't walk near that corner any more.) 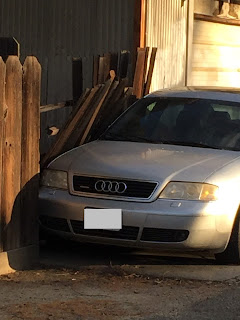 Posted by Theresa B (of Nebulopathy) at 9:06 PM