Today I tried to redo/improve on yesterday's efforts with acrylics. (As suspected, yesterday's vomitus contained too much water and is not hardening -- ah, well, art is sometimes ephemeral and who am I to argue with the Fates?)

Anyhow, today I mixed blue in with the base and then tried to float some yellow on top, only slightly working it in. It looks a bit like some sort of slide you'd see that used an unusual stain. Or possibly some neuro scan.

Or... it looks like a painting done by a T. rex who couldn't quite look at the canvas at the same time as it was close enough to paint and had to imagine what it looked like as it turned to the side to get its arms close enough. Thus I am going to refer to it as the RAWR-schach step. You can see in it whatever you want to. 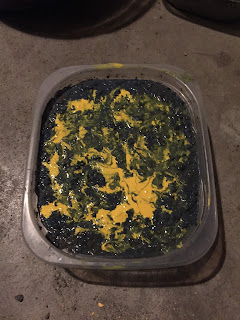 (Thursdays are known as a sleep deprivation test for a reason.)
Posted by Theresa B (of Nebulopathy) at 8:20 PM

Now I understand why there isn’t more art from the Cretaceous period.

I put acrylics in my mosaics, but it seems like it'd be hard to get them to show up with concrete. I usually need to use lighter shades of grout for them to show up.