Day two of Thingadailies during the masochistic month of February:

The seeds of my self-destruction are sown deep.

All that is to say that I took yesterday's stepping stone out of the Redvines mold today. Some stuff on the edges flaked off, so probably I should have left it in. (Imagine that -- I should have followed the instructions. Who knew?) It does look a bit like a stepping stone which is good. I'll have to check the fragility in a few days. 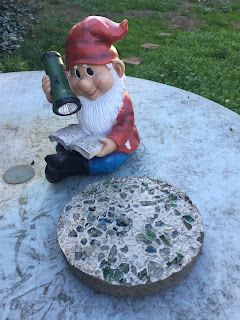 That left the mold free for me to try something different today. Since I have obviously mastered the basics, this evening I added color in the form of clothing dye. You know, that stuff you throw in the washer to make your old jeans look like you screwed up doing laundry. First I mixed in the red and poured most of it into the mold. Then I mixed in some black and tried to swirl that in.

The theme I'm seeing here is... underwhelming. Also, this concrete was waaay too wet. It acted like the self-leveling stuff, but I was too tired and lazy to fix it (because I had to drive into work today for a meeting in the morning due to the fact that I pointed out some problems instead of just keeping my mouth shut like I should have learned to do by now). Besides, I mostly wanted to see how it would look when it dries (or cures or whatever the heck it does. Chemistry!) with the color mixed in.

Keep that in mind when you look at this next picture. 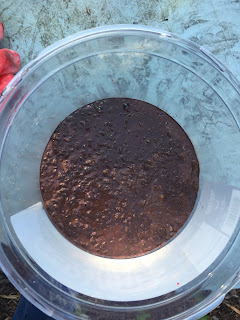 Yeah, it reminds me a bit of some things I saw coming out of dogs with parvovirus. Here's hoping it gets better later...

Posted by Theresa B (of Nebulopathy) at 6:26 PM