Revenge is a Dish Best Served with Cat Gifs

I'm too lazy to search my old blog posts, but I'm pretty sure I mentioned that at one point my boss annoyed me and I got back at him by texting him something like twenty cat gifs over the next couple of days. (As you can tell, I'm an excellent employee and an overall joy to work with.)

So today, he was having trouble with his phone (and I'm just doubling down on "it was his phone, not the network" here, because if it wasn't his phone our whole department is in trouble because we design and run the network). He couldn't text anyone, and incoming texts were not getting to him.

For a while he was trying to figure out if it had something to do with sending texts to a group (And have I mentioned before how much I hate group texts? Because my boss is the most egregious offender. He sends group texts about everything, and then people start "liking" the texts, which sends me another text. On my birthday they managed to send about forty birthday messages/likes in the space of an hour just to irritate me. I almost blocked all their numbers.)

So today I sent him a test message. And what better thing to send than a cat gif?

Naturally mine was the first one to get through, and then all the other test messages were delivered and his phone sounded like it was a really bad video game for a few minutes.

My theory -- based on all the available evidence -- is that we just need to send him a cat gif to push things through any time we send him a text.

Another thing to know here is that I'm a terrible pet parent -- I left the big dog home alone today without an e-collar, just assuming he'd be good and not chew his stitches out. About 3pm I was starting to have some buyer's remorse on that decision, and I mentioned I was a little worried. My boss asked me to text him when I got home so he would know my dog was okay.

You know where this is going, right? 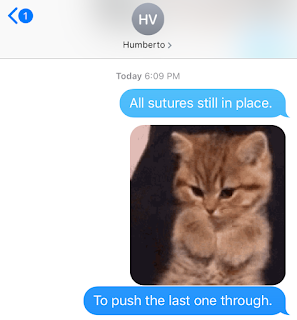 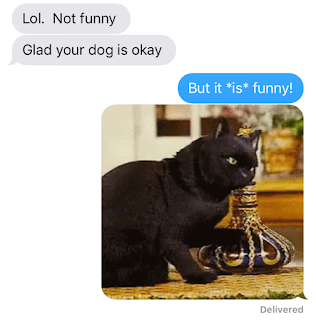 I figure I can keep this going for another few days (or weeks). There are a lot of cat gifs available...
Posted by Theresa B (of Nebulopathy) at 7:13 PM

Genius! I taunt my boss by explicitly pointing out Maggiano's on the maps I make for group dinners. She doesn't like Maggiano's; I love Maggiano's. Heh.

You have to take these opportunities whenever you can, right?