For me, baking is a lot like home repair. I see the thing I want to make/do, I go buy all the parts, and then I get home and realize that there is no way in hell I have the ability to do this. There's no hope for my house, but at least with baking I can either eat the evidence or throw it away. And baking is cheaper than DIY.

This is the recipe I was aiming for: https://www.quick-german-recipes.com/dominosteine.html. I've never seen or tasted them before, but I like marzipan. Also, I bought the bottle of rum for these things last week, so come hell or highwater, I was making them.

I prepped by watching a couple episodes of Claire Saffitz of the Bon Appétit test kitchen in the "Gourmet makes..." series. (They're on YouTube. Everyone is entertaining except for that one really obnoxious guy who is exactly like all the guys that would stand around interrupting and talking about random shit in school while you were trying to get work done and then copy all your answers at the end.) Anyhow, mostly what I learned is that Claire is willing to redo things multiple times until she gets it right. That's not really how I work. For me if it doesn't come out right the first time... I shrug and move on.

I ran into my first problem when it called for an 14x17" pan, which I don't have and the grocery store didn't have. I compromised by using two slightly smaller pans for the lebkuchen, but of course that meant the thickness wasn't quite the same.

Whatever. Cake is cake. Except when you then need to cut it in half horizontally.

I cut the first pan in half more or less horizontally. Mostly it was less. Much much less. The cake wasn't very even. I'd assumed it would level out a bit in the oven. That did not happen. The second pan of lebkuchen I just cut in half and folded back on itself. Was it twice as thick as the other pan? Yes. Did I care? Not really.

If anyone ever tells you to roll out 4 oz marzipan until it's thin enough to cover two pans of lebkuchen, laugh in their face and make them go away. Still, I eventually got the marzipan more or less evenly distributed. A little apricot jam later, everything was assembled and I was ready to dip the squares in chocolate.

The good news is that google will tell you how to make a double boiler. The bad news is that unless there is some secret way to do this, dipping cookie squares in hot chocolate involves burning your fingers a bunch. Then I ran out of chocolate and just poured the rest over the remaining squares.

I am ready to admit that I am not prepared to be on the Great British Bake Off at this point, though I am really good at finishing things quickly.

The more or less correct ones: 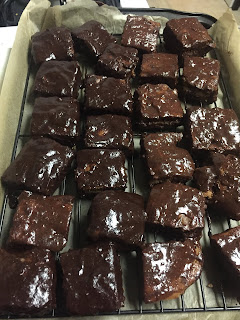 And the non-camera-ready remainder: 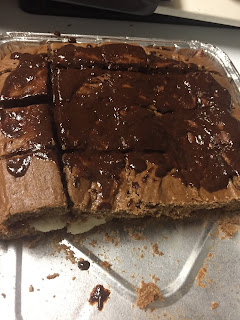 It still looks better than every home repair project I've ever tried, though, so at least there's that. 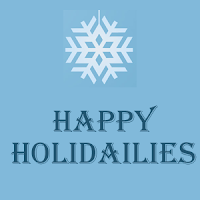 Posted by Theresa B (of Nebulopathy) at 7:05 PM

That is way more complicated than I would ever attempt! Bravo!

They look delicious. I view every baking calamity as more for me, so I’m never very disappointed.

I may try a scaled-down version with graham crackers, marzipan, apricot jam, and some dipping chocolate and see if I can get a better looking finish. Or maybe just move on to the next disaster!

"It still looks better than every home repair project I've ever tried, though, so at least there's that." Great ending! The nice thing about baked goods is that, at the end of the day, things made of lots of sugar and fat tend to taste pretty good, regardless of aesthetics.