Exchanging gifts with my siblings during the holidays seems a little ridiculous when everyone has enough money to get anything they need during the year. And my niblings have so much stuff it feels like I would just be contributing to the destruction of the planet if I got them more, so I usually just contribute to their 529 accounts. I have everything I need (and more), and I don't really want to have to find room in the house for things I don't want. Basically, unless the gift is homemade or something that the recipient wants but can't afford, I think the holiday money is better spent on experiences or just going to charity.

This year, I've decided to make dog biscuits. That means everyone I know with a dog might get a present. And everyone who doesn't have a dog won't. Somewhat arbitrary, yes, but it works for me.

The first batch is from this recipe: https://damndelicious.net/2015/01/07/homemade-peanut-butter-dog-treats/.


My dogs give them a thumbs up, though I will admit that my dogs aren't super picky. One of their favorite treats these days is the persimmons that my neighbors have been desperately giving away.

These cookies were pretty easy to make, though I might just use the springerle rolling pin next time so I don't have to keep re-rolling the scraps. 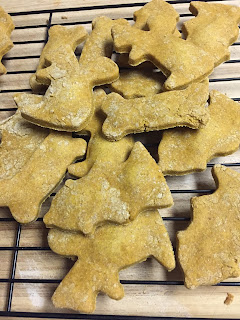 At this rate I'll talk myself into buying a Kitchen Aid and a kitchen remodel so I have counter space to use...

Posted by Theresa B (of Nebulopathy) at 7:54 PM