It's day four of my work-related house arrest, but more importantly, it's day one of Thingadailies! For those not in the know, Thingadailies is like Holidailies, but instead of just posting something every day for the month of December, "all participants commit to making one thing every day during the month of February, and sharing / talking about it on their blogs".

Anyhow, since it was after 11pm and I just got done working and walking the dog, I decided to go with something easy. I got the perfect thing for Christmas: 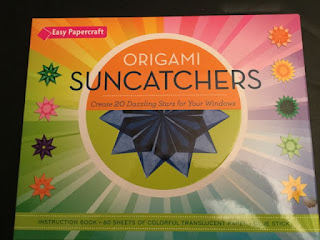 I know it's the perfect thing for a late night project because it says "Easy Papercraft" right there on the box.

On opening the box, the first thing you see is a glue stick. I'm no origami expert, but I'm pretty sure using a glue stick is not a traditional method. The book also says I need scissors. Again, not an expert, but if I remember correctly, origami specifically forbids cutting or tearing the paper. So I think this might technically qualify as some bastardized form of kirigami, but heck, it's 11pm so who really cares. On with the suncatcher!

As I was cutting and gluing, I spent a lot of time thinking that this seemed like a quilt pattern. And then I thought paranoid thoughts about the gift giver trying to suck me into the black hole of quilting. But then I remembered that quilting would require me to be neat and methodical and really there isn't anything I'm less suited for and everybody knows it.

So here's the picture in the book: 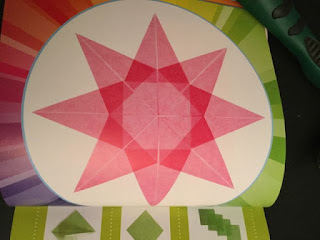 After a few minutes and some help from these... 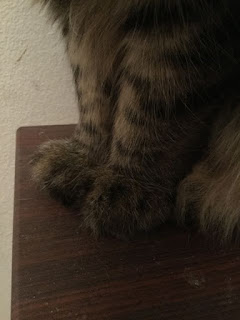 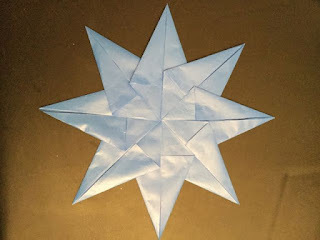 It is, perhaps, not as neatly done as the book would suggest it might be, but whatever. It looks pretty much like what it's supposed to look like. 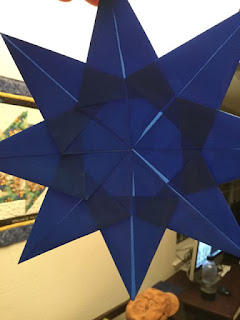 Hi your blog is nice. Making ancient cat toys is nice idea. Cats are like kids so, toys plays very important role in their life. Toys give your loving cat company when they are alone. To buy online cat toys go to Pets Department.